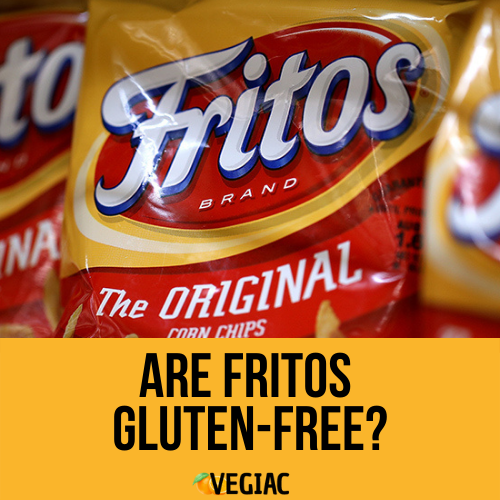 Frito-Lay, the company behind Fritos snack, has proven through analytical testing that Fritos can be defined as gluten-free under the FDA’s Gluten Free Food Labeling Final Rule.

That, however, may not be true for all the products produced under the Fritos brand, though, as corn-based products they shouldn’t contain any gluten at all.

It’s unlikely that there are many who aren’t familiar with this seminal American snack, but for the sake of the few let’s delve a little into what Fritos even are.

Fritos are very popular – some would even argue the most popular – corn chips in America. They’re even sometimes called “the original corn chip”. They’re made from extruded whole cornmeal that doesn’t go through the nixtamalization process (unlike traditional tortilla chips), which results in a more rigid texture and pronounced flavor.

Often enjoyed as a side dish to sandwiches, dip scoops, or on their own for a snack, Fritos have become a nigh inseparable part of American snacking habits.

They’re so popular that they’ve even transcended their status as a snack and made it into the dinner category with a dish called Frito Pie.

And since many have strong emotional ties with the snack, usually going all the way back to early childhood, it’s unsurprising that they’d be glad to know that it’s not required to cut Fritos out if they start experiencing gluten intolerance.

Well, some of them at least. It can get a little complicated.

Are All Fritos Gluten-Free?

Here’s where it gets a little complicated. Fritos, by design, are supposed to be automatically gluten-free since they’re made out of corn and corn doesn’t contain any gluten. Gluten, in fact, is only found in wheat, barley, and rye.

The problem is, wheat is often used in some capacity in products where one wouldn’t expect it.

When it comes to Fritos, this fact arises head as a potential danger – Fritos on their own do not contain gluten, but certain processes may cause them to be cross-contaminated.

This is why if you take a careful look at products under the Frito brand on the official Frito-Lay website, you’ll notice that only some are marked as outright Gluten-Free, while others are marked as “not containing any gluten-containing ingredients”.

Which Fritos are Gluten-Free?

Only four of the Frito corn chip varieties are marked as gluten-free on the official website. Accordingly, we can assume that these four are processed and packed in a way that prevents them from coming into contact with any substances containing gluten.

If you suffer any gluten intolerances, getting either one of them should be completely fine.

Which Fritos May be Contaminated with Gluten?

The flavored Frito varieties are all marked as not containing any gluten-containing ingredients instead of gluten-free outright.

This means that while original Frito ingredients haven’t technically been altered in any major way (it’s still a corn-based product with no added wheat, barley, or rye-based ingredients), there’s a possibility that the products may have been contaminated during the production or packaging process.

If you suffer any gluten intolerances, then adding either of these Frito snack varieties would mean incurring certain health risks.

The secret to such difference between the original line and flavored line most likely lies in the environment and circumstances in which the flavoring process takes place, as the list of ingredients between the two lines is the one glaring difference.

All unflavored Frito varieties (original, lightly salted, and regular scoops) have a very simple ingredient list on the official website – they’re made with corn, corn oil, and salt. That’s it.

The flavored varieties aren’t so straightforward. Aside from natural seasonings and spices, all of them contain both natural and artificial flavorings, flavor enhancers (like disodium inosinate and disodium guanylate), and artificial colorings.

Frito-Lay is absolutely correct when they say that Frito products don’t technically contain any gluten-containing products. None of the ingredients given on the packs have anything to do with gluten.

That said since the production process of flavored varieties seem to significantly differ from the original line and seems to go through more steps, it’s unsurprising that the chances of contamination occurring are rather high.

While there might be a certain temptation to indulge with a chili cheese Frito or dip a spicy jalapeno scoop into the dip instead of a plain one – the risks are just not worth it.

While it may not seem like a big deal to risk a tiny amount of gluten, especially since there’s no evidence that the product has been contaminated, the results may not be pretty. Even when you have non-classical or silent celiac disease and don’t experience more pronounced debilitating symptoms, gluten is still doing damage to your small intestine.

Sticking to the non-flavored line is the best option here.

The graph below describes the nutritional information for Fritos Original Corn Chips:

This nutrition information is mostly valid for flavored varieties as well, aside from the sodium content, which is a bit higher at 200-210mg per 1 serving (aside from Flamin’ Hot Flavored Corn Chips, which contains only 170mg per serving, similar to the original).

Especially the original line varieties that contain only 3 natural ingredients, can be occasionally indulged in with no particular threat to overall health.

Just don’t have a Frito Pie for breakfast, lunch, and dinner, and you should do fine.