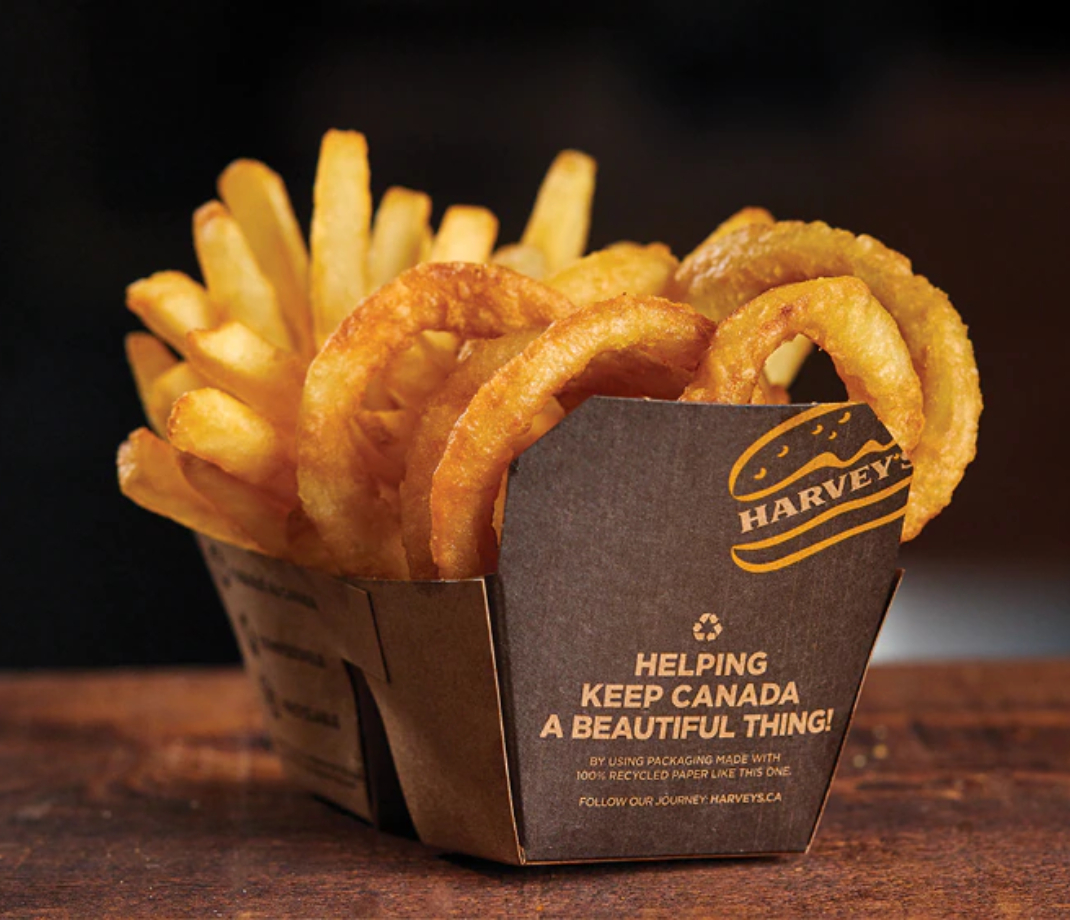 Harvey’s fries themselves are gluten-free, as they contain only potatoes. However, Harvey’s states on their website that cross-contamination does occur within restaurants, and they can’t guarantee that any menu item is completely free of allergens.

If you’re unable to eat anything that has trace amounts of gluten, you should probably be very cautious or skip Harvey’s fries altogether.

Their onion rings are fried onions dipped in a batter that contains wheat and fried in oil. Depending on the location, the fries may go into the same oil as the onion rings which would render them not gluten-safe.

If you can have trace amounts of gluten, Harvey’s fries should be enjoyed on their own, and not in poutine form. Poutine consists of fries, cheese curds, and gravy, and Harvey’s gravy is not gluten-free.

The condiments at Harvey’s are gluten-free for the most part, so dipping fries in ketchup, ranch, or honey mustard is safe – IF you can tolerate trace gluten.

Harvey’s has few standalone gluten-free options. As stated on the website, anything may be subject to cross-contamination and trace amounts of gluten. The restaurant itself can’t be classified as gluten-free. But if you are able to tolerate trace gluten, here are a few options:

Harvey’s is a fast-food burger joint based in Canada, with stores in every province. They are one of the longest-standing Canadian restaurants.

Their menu consists of classic fast-food fare like hamburgers, hot dogs, fries, onion rings, and milkshakes. They also serve Canadian classics like poutine and a side known as ‘Frings’ which is a basket containing fries and onion rings together.

Harvey’s introduced a novel concept to the Canadian fast-food scene when it began operations in 1959. Instead of customers placing orders and taking their receipt until their order is ready, customers obtained the receipt to be placed on the counter. As the order moved along the customer moved along the counter with their receipt, and were able to have their burger customized with toppings.

Until the ‘70s, Harvey’s fries were made by handwashing and hand-cutting potatoes from Prince Edward Island into thick chip-style fries to be served fresh to order. This distinguished them from other fast-food chains that served thin, pre-sliced, and frozen french fries.

Since coming under new management in the ‘70s, however, the number of toppings was decreased and freshly cut PEI potatoes were no longer used. From that day to this, fries at Harvey’s are pre-frozen and pre-cut.

Harvey’s Gluten Free Menu – Is / It by Urban Tastebud