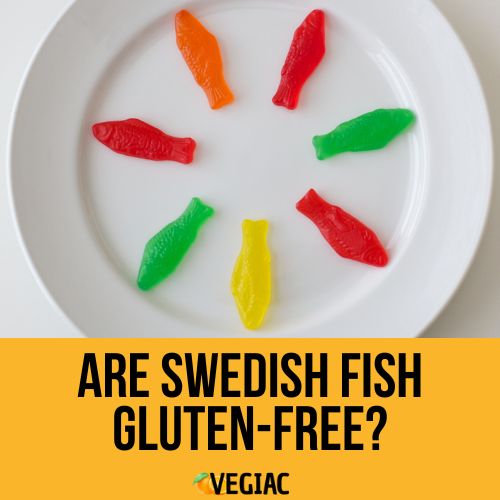 The sweet and soft, chewy consistency of Swedish Fish seems to be the ideal combination. While throwing a game night at your house or going to the movies, they make the perfect snack. Although the traditional red Swedish Fish is the most well-known, many more delicious tastes and hues are available.

Do Swedish Fish not contain gluten? Yes, in a nutshell. Swedish Fish are not marked as gluten-free on the U.S. market. Still, they are generally considered acceptable to consume on a gluten-free lifestyle because they are not manufactured with any gluten-containing components.

Let’s discover what ingredients are in Swedish Fish, including other allergens you should know about, why Swedish Fish aren’t gluten-free certified, what that certification means, and which Swedish Fish products are gluten-free.

Swedish Fish are prepared with components that do not contain gluten, even though they do not come with a gluten-free label.

Of course, you might want to stay away from them entirely if you have a severe gluten allergy. Always examine the label because ingredients might vary or change from one nation to another.

To be gluten-free, food does not need to have a certification. As many organically gluten-free meals don’t have the accreditation as there are naturally gluten-free goods that do. A product that has received official gluten-free certification is ensured to be free of gluten proteins and has undergone testing to confirm it complies with requirements. Products that aren’t gluten-free-certified may have been processed with cross-contamination or minor levels of gluten.

While Swedish Fish doesn’t have any gluten ingredients, it’s still worth noting that the lack of certification means there could be contact with products that do include gluten, and you won’t know. For those with severe gluten sensitivities, it’s best to avoid foods that aren’t certified gluten-free.

Are Swedish Fish Vegan and Gluten-free?

Swedish Fish are both gluten-free and vegan. Gelatin originates from cows and is used to make a lot of gummy candy. However, a mix of substances, including corn syrup, carnauba wax, and modified corn starch, gives Swedish Fish its gooey feel. As a result, Swedish Fish can be consumed by people following vegan and gluten-free diets.

Are Swedish Fish Dairy and Gluten-free?

Swedish Fish are devoid of dairy and gluten and contain sugar, corn syrup, modified corn starch, and other dairy and gluten-free ingredients. An excellent snack for those with food allergies is also free of soy and peanuts.

What are the Ingredients in Swedish Fish?

Note that this ingredient list includes other allergens besides gluten, such as carnauba wax and citric acid so ensure that you don’t stop your investigation at gluten-free, especially if you’re giving Swedish Fish to someone when you don’t know how these other allergens could affect them.

Swedish Fish are gluten-free, but that doesn’t mean they’re good for you. These gummy candies adhere to your teeth and can cause cavities and gum disease since they are high in sugar and include modified and severely processed substances. Your chance of acquiring diabetes may increase if you eat Swedish Fish. They also have Red 40, which is linked to children’s hyperactivity.

All varieties of Swedish Fish are manufactured without any components that include gluten. This indicates that they belong to the category of candy that is often safe for persons with Celiac disease to eat.

Here is a list of all Swedish Fish products that are naturally gluten-free:

Where to Buy Swedish Fish

If you’re having trouble locating them locally, you may try hunting for them online using Amazon or other shops.

It’s advisable to study the contents lists on the packaging before purchasing any product that doesn’t make any promises about being gluten-free because recipes may change at any time.

Other Gummy Candies That Are Gluten-Free

There are plenty of other chewy candies out there that are gluten-free, just like Swedish Fish, that may fit your dietary needs better:

Are Swedish Fish gluten-free? In a nutshell, yes. Swedish Fish aren’t labeled as gluten-free on the American market. Still, since they aren’t made with gluten-containing ingredients, they are typically considered facceptableto eat if you’re following a gluten-free diet.