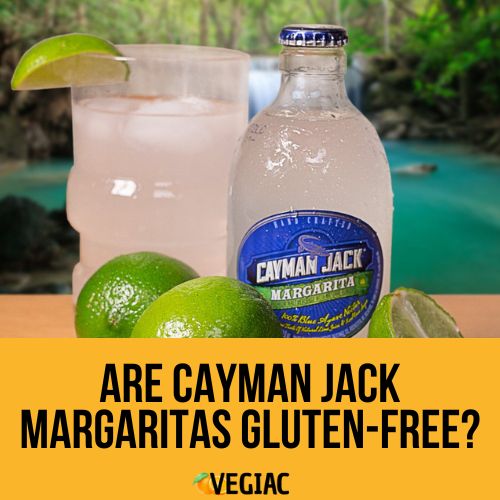 We don’t often stop to consider what might be in our beverages that could potentially aggravate a food sensitivity or allergy. When it comes to alcoholic beverages, some of them can contain gluten, even from hidden sources.

Margaritas, for instance, are a delicious chilled drink, with Cayman Jack making a convenient canned version; but are Cayman Jack margaritas gluten-free?

Cayman Jack’s line of margaritas are gluten-free, as are the rest of their alcoholic drinks. While they can’t be considered 100% free of gluten, the process they use to formulate their drinks aims to take out as much as possible.

As of now, they can bring it down to less than five parts per million, so they are safe for most people sensitive to gluten. While this would technically mean they can be certified gluten-free, there are certain regulations about alcoholic beverages that are made from grains being given that label.

How Does Cayman Jack Remove Gluten From Their Margaritas?

Since the base of Cayman Jack drinks are malt, they use their own unique and secret process to extract as much gluten as possible from their drinks. As mentioned, they are able to bring their gluten content down to a very miniscule amount through this process.

In order to verify the results of their process, their drinks have undergone testing using the ELISA test, also known as the R5 Competitive Enzyme-Linked Immunosorbent Assay test, which can pick up even the most minute trace amounts of anything that could potentially impact the immune system, such as allergens like gluten, antibodies, and much more.

What Does Gluten Removal Do To Flavor?

Those who have always enjoyed the taste of margaritas might be concerned about how Cayman Jack’s gluten removal process has helped or hindered the flavor of this classic, tasty drink. The good news is that this process hasn’t had an impact on how delicious the ready-made margaritas are.

All that has changed is that more people are able to enjoy a premade cocktail like a margarita without having to be concerned about ingredients that could cause them to have a reaction.

What Kinds Of Margaritas Does Cayman Jack Make?

As of now, Cayman Jack offers their original margarita, as well as a watermelon, mango, and strawberry margarita. Beverages can be purchased either in glass bottles or cans. Outside of margaritas, Cayman Jack makes a moscow mule, a mojito, and a pamola.

The majority of margaritas are gluten-free in terms of their most basic ingredients. Tequila, like most liquors, don’t contain any intact gluten as it’s all distilled out by the time the liquor is poured into the bottle. This is true even if the liquor is made from wheat or other gluten-containing grains.

Are Cayman Jack Margaritas Made With Tequila?

Cayman Jack’s line of margaritas are made with great tasting tequila. One of the best things about Cayman Jack margaritas is that, even though they are pre-mixed, they are made with frew high quality ingredients and no artificial ingredients. All that makes up the original flavor is blue agave nectar – or crisp, delicious tequila – lime juice, and cane sugar.

The type of tequila used in Cayman Jacks margaritas and many other tequila-based cocktails are gluten-free because of how they are distilled. Tequila comes from the blue weber agave plant. However, some tequila made with additives may or may not contain gluten; what’s important is to know what those additives are.

The same is true of mezcal, which many mistake for being the same thing as tequila because it also comes from agave.

One might think a malt beverage like Cayman Jacks would have to contain gluten, but it doesn’t. Many other kinds of malt beverages do contain gluten. This is why, especially when it comes to alcoholic drinks, reading the label and doing research is crucial.

Malt comes from barley, and barley is a grain that is pretty chalk-full of gluten. Most alcoholic drink companies that have products made with malt don’t have the same kind of special process that Cayman Jacks does, so they aren’t able to extract most of that gluten out of the formula.

Cayman Jack is said to be a man of fairly legendary status, with a remote bar within a shack where he served some of the best cocktails people had ever tasted. It’s said that Jack was able to shake up the perfect cocktail every time, no matter what.

The label now features four different types of margaritas and more tequila-based cocktails available in either a can or a bottle so you don’t have to try and track down Cayman Jack’s oasis bar to try one of his perfect cocktails.