Who Else Wants To Enjoy Gluten-Free Pita Chips? 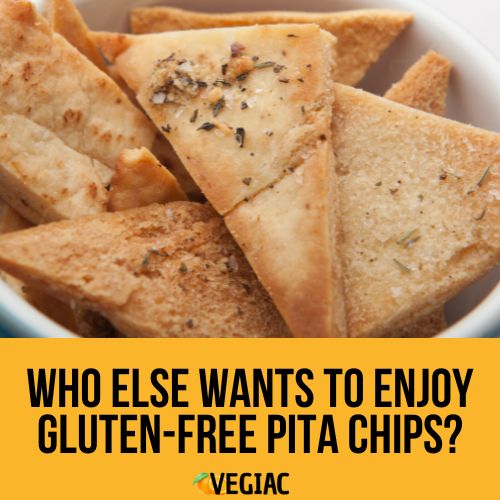 Pita chips are truly an enjoyable snack and are popular in a lot of different appetizer recipes, going well with hummus, tzatziki or other yummy foods.  Some people who enjoy pita chips also battle with an inflammatory ingredient- gluten.  Gluten is unfortunately a commonly found ingredient in pita chips, so those with intolerances need to be on the lookout.

There are plenty of ways to obtain gluten-free pita chips- the trick is knowing how to locate them on store shelves, how to read labels correctly, or even making them on your own.  Ingredients such as wheat, autolyzed yeast and others can make it a little difficult for those with gluten sensitivities to enjoy pita chips as easily as others can.

No matter your lifestyle, you should be able to enjoy pita chips that don’t taste “off” without all the physical repercussions.  From making your own to buying them in the store, getting your hands on scrumptious pita bread without gluten will be a cinch for you after you’ve finished reading through this guide.

Pita chips are an amazing tasting snack and appetizer eaten by many people and cultures around the world and are small slices off larger chunks of pita bread which are baked until they provide a distinguished crunch.  If you decide to make them homemade and bake them, or buy from a brand that bakes instead of fries them, they can also be a healthy snack option.

One easy way that you can get some gluten-free pita chips in your life pronto is by making them yourself!  All you need is some seasoning such as garlic powder, paprika, onion powder, sea salt, chili powder, cumin, oregano, thyme, sumac, rosemary, everything bagel seasoning, some gluten-free 1:1 flour, cornstarch, baking powder, eggs, milk and Greek yogurt.

Other ingredients you can use to make gluten-free pita chips include cane sugar, tapioca flour, white rice flour, psyllium husk powder, and oil.  The trick to making pita chips without gluten is to find a suitable gluten-free flour replacement and then determine the correct substitution ratio to make a successful recipe.

You will begin by assembling the gluten-free dough ingredients and forming it into a messy ball, then move onto kneading it with your hands to form a more uniformly shaped sphere.  Once this process has been finished, you’ll let the dough rise in an area that’s approximately 120 degrees Fahrenheit for around 45-60 minutes.

Next, you’ll divide the dough into many smaller balls and roll them out to approximately ¼” thickness, shape them and then fry them in the skillet with some oil.  The amount your pita chips puff up in the frying pan all depends upon how thin you rolled out the dough.  Once you’re done frying them, you can begin the tastiest part-seasoning them with your favorite herbs and salts.

Another option for making pita chips can be to do all of the above steps but refrain from frying them in an oil, baking them instead.  This cooking method will ensure that your pita chips turn out to be very crunchy, which is considered to be a desirable trait by a lot of consumers who are fans of pita chips. Making them thinner will also produce a crunchier chip.

There aren’t a lot of brands that offer gluten-free pita chips.  Some that offer them are:

Brands To Avoid Or Be Watchful Of

There are unfortunately a lot of brands that offer glutinous pita chips.  Some of the brands you should be aware of include:

Pita bread and chips originate from Greece and has historically been made using wheat flour, which is a huge gluten carrier.  Since traditional pita bread and chips are made with traditional ingredients such as wheat, those with this kind of dietary restriction may be hard pressed to locate many suitable gluten-free pita chips in stores, and may be better off going homemade.

If you opt to make your own homemade pita chips that are free from gluten, you only have to determine which ingredients you would like to use as a substitute for those that are normally used in making pita chips but contain gluten.  For example, you might try using almond flour in place of wheat flour to avoid gluten, using a 1:1 ratio.

Another way that you can use gluten-free ingredients in place of glutinous ones used in pita chip making such as wheat flour is tapioca flour, as mentioned earlier.  You can use this while following your pita chip recipe, substituting it for wheat flour at a 1:1.5 ratio.  When using psyllium husk as a substitute, use it at a ratio of 3 tsp husk to 1 ¼ cup wheat flour.

Another suitable substitute for wheat flour in pita chip making is coconut flour.  You can use this in a ratio  ¼-⅓ cup coconut flour to 1 cup of wheat flour. In order to accurately determine the exact ratio you’ll need for your recipe substitution, you might need to repeat recipe attempts several times altering the coconut flour amount each time until you find the correct amount.

Traditional pita chips are historically glutinous, but that doesn’t mean those with gluten intolerances have to go without snacking on these delicious delicacies.  With a little ingredient substitution, ingenuity, preparation and knowledge of ingredients to be wary of when shopping, anyone with a gluten intolerance can still enjoy these snacks.