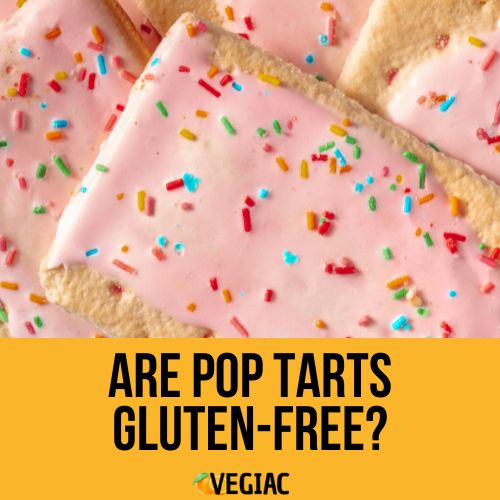 Breakfast is arguably one of the most important meals of the day. One common breakfast food is pop tarts. They’re popular due to their variety, and also their delicious taste. However, are pop tarts gluten-free?

The rest of this article will cover why pop tarts aren’t gluten-free, how to find gluten-free pop tarts, how to avoid pop tarts, and alternatives to pop tarts.

Unfortunately, pop tarts aren’t gluten-free because of the ingredients inside them. Pop tarts are made with something called wheat flour, which contains gluten. However, this doesn’t mean that there’s no gluten-free pop tarts. You can find them, but they’ll be more expensive.

Gluten is a product you’ll find in products like pop tarts. Pastries, which is what pop tarts are, are made with gluten except in rare cases. The common way of making pastries involves gluten. Flour contains gluten, and since so many pastries have flour, that’s why they aren’t gluten-free.

The same reasoning applies to pop tarts. Along with the flour used, there’s a sweet filling inside the thin layers of crust. Sometimes, this filling doesn’t have any gluten in it. A fruity filling likely isn’t going to have gluten in it. However, the filling can, like the crust, contain gluten.

If you’re someone who can’t have gluten, it’s not a great idea to try just any pop tart. You’ll have to search for specific pop tart flavors that’ll work for you and your diet. Be mindful of the ingredients going into the pop tarts, and only buy boxes with a labeled ‘gluten-free’ certification.

How To Find Gluten-Free Pop Tarts

Although the gluten-free version of the breakfast meal is harder to find, that doesn’t mean it’s impossible. For example, if you go to a local grocery store, you can find boxes of pop tarts not containing gluten. Since there’s less of them, be prepared for them to be sold out.

Your last option is to order them online. There’s pros and cons to this. For the pros, you know that you can get as many pop tarts as you want and won’t have to worry about stock, and you don’t have to leave your home. The big con is that shipping could take several days, or even over a week.

Multiple online sellers will have gluten-free pop tarts. The first place you can check is Amazon because of the convenient review system. You can go to the reviews and product description to find out more about the food and if it’s right for you.

Amazon may not appeal to everyone, but there’s alternatives. There’s countless other online vendors you can go to. For example, you can go to the websites of Target and Walmart. If you can’t find the products in-person, then try online.

How To Avoid Pop Tarts

Breakfast is a meal that has a variety of foods to choose from. The problem is that plenty of those options have gluten in them as well, like cereal. Most cereals have gluten because they’re made from grains. The same applies to other foods like pizza, pasta, and bread.

The easiest way to avoid pop tarts is to not buy them altogether. However, if you really want them, then you can still buy them albeit with extra caution. For starters, you should read the ingredients list carefully to make sure there’s no gluten products in the food.

From there, you can double-check the gluten-free label and ask a worker about the contents. After you complete those tasks, you can buy the pop tarts with no fear that they’ll cause any problems. If you can’t find any gluten-free pop tarts, then your best bet is to get an alternative.

Pop tarts are toaster pastries that aren’t very healthy, but are a tasty treat you should indulge in every once in a while. If pop tarts don’t appeal to you, or you can’t find the gluten-free version, you should expand your horizons by trying different types of pastries.

If you’re looking for something different, you can try coconut-flour pancakes. Coconut and pancakes are two words you probably never imagined you’d see together. But these pancakes are healthy thanks to the coconut flour. They’re also gluten-free, and light and fluffy.

Pop tarts aren’t gluten-free thanks to the ingredients that are used to make them. There are gluten-free variants of pop tarts, but unless they’re distinctly marked as gluten-free, the odds are, they have gluten. Be careful and make sure to look for a gluten-free label on the box.

Search both in-person and online to get gluten-free pop tarts. You’re more likely to find them in-stock while shopping online, but grocery stores, Target, and Walmart will have them as well. If they aren’t in stock in-store, try checking the store’s website.

To avoid pop tarts, don’t buy them, or you can be careful with what type of pop tarts you’re buying. If you’re looking for alternatives to pop tarts, experiment with different breakfast foods like gluten-free cinnamon rolls, or coconut pancakes. These alternatives are also healthier.