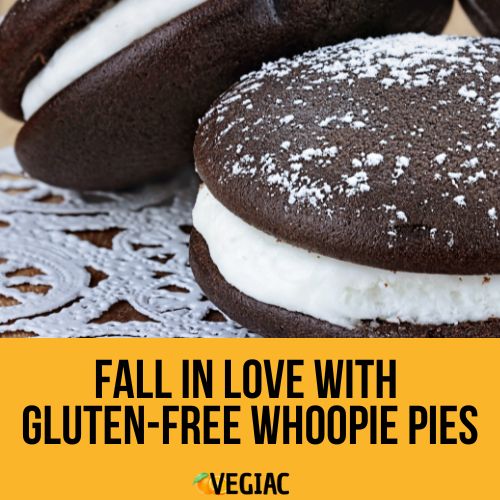 One of the biggest challenges of living a gluten-free lifestyle is giving up some of your favorite foods – usually desserts.

Thankfully, though, some enterprising cooks, chefs, and kitchen experiments around the world have helped usher in a new era of gluten-free foods. Some of our classic favorites, foods that we grew up loving, now have legitimate 1:1 clone recipes available that are completely gluten-free.

Believe it or not, gluten-free whoopie pies on that list!

In the rest of this detailed guide we run through most everything you need to know about not just making your own delicious gluten-free whoopie pies, but also whether or not these whoopie pies taste any good – and the big differences between store-bought and homemade options.

Are Gluten-Free Whoopie Pies Any Good?

In the early days of gluten-free dessert experimentation the overwhelming majority of recipes were only so-so, with most experiments proving to be 100% gluten-free – but also proving to have nowhere near the same flavor or texture of the original dish they were trying to clone.

Today, though, nothing could be further from the truth.

Today’s gluten-free (GF) whoopie pies are downright delicious, but they also have that soft, almost squishy texture to them that closely mimics the “real deal”.

Even better than that, though, is that these gluten-free options are a whole lot healthier, stay fresher longer, and (when you make them yourself) you can tinker with different ingredient ratios to get exactly the kind of flavor you are after.

Our gluten-free whoopie pies any good?

You bet they are!

Of course, just because you have the ability to make your own GF whoopie pies at home doesn’t mean you necessarily have to.

There are all bunch of commercially available whoopie pies available in department and grocery stores clear across the country, with more and more GF friendly bakeries getting in on the action all the time.

The Gluten-Free Shop, Cape Whoopies, Peace of Mind Baking, and Something Sweet without Wheat are just some of the bakers offering store-bought gluten-free whoopie pies well worth checking out.

The only wrinkle here, though, is that each of these whoopie pies have their own specific and distinct recipes – and that means they taste a little different than one another (as well as different than the original whoopie pie).

On top of that, it’s important to remember that store-bought options are going to have all kinds of preservatives and additives mixed into the otherwise healthy recipe to extend their shelf stability.

That may or may not be something that you feel comfortable putting into your body, especially after making the switch to the GF dietary lifestyle.

Something to consider, all the same.

Everything You Need to Know About Making Gluten-Free Whoopie Pies

Let’s say, though, that you just can’t go without your favorite whoopie pies after making the gluten-free switch and have decided to make them on your own in your own kitchen.

Believe it or not, the process for knocking out homemade GF whoopie pies is a whole lot simpler and more straightforward than most people would have realized. The whole process, from start to finish, is only going to take a couple of hours at most.

The first thing you’ll want to do is get your hands on some quality ingredients, with four main ingredients being a whole lot more important than all the rest.

The unsweetened cocoa powder you choose is going to have a huge impact on the flavor of the whoopie pies you make. Dutch process cocoa powders are some of the best in the world, with rich chocolatey flavors tough to find in other powders. At the end of the day, though, this is really all about personal preference.

Finally, you want to use a great oil as a backbone ingredient in this recipe. Canola oil works well, but vegetable oils or even melted coconut oils can be used as well. Steer clear of butter, though. It’ll mess with the texture.

Begin the whoopie pie making process by mixing your GF flour, your cornstarch, the cocoa powder, the baking soda and baking powder, as well as the espresso powder and salt together. Really mix things up, evenly distributing these dry ingredients.

Next, mix together the sugar ingredients, the vanilla, and the oil that you’re using. A stand mixer comes in big here.

Add the egg (the whole egg, minus the shell) to the mixing bowl. You’ll also want to add the butter milk. Combine everything well until you’re working with a smooth liquid.

Now is the time to add warm water into the slurry you’ve been mixing up. Continue to mix on slow, allowing your gluten-free whoopie pie batter to form up.

Move the dough from a mixing bowl in an airtight container and stick the whole mess into the fridge for two hours (and up to three days if you’d like). This gives everything time to firm up. It’s critical for the texture of the finished result.

All that’s left to do is scoop out the refrigerated dough onto a cookie sheet, pop the whole thing into the oven (350°F) for about 10 to 11 minutes, and you are good to go.

While your cookies are baking you can work on the filling.

Mix your butter, vanilla, and salt for about five minutes and then add powdered sugar into your mixing bowl, just 1/3 at a time. Turn up the speed to about medium-high and let things rip for two or three minutes until the consistency starts to build.

Add in 2 tablespoons of milk or so and mix for another minute until you get your finished result.