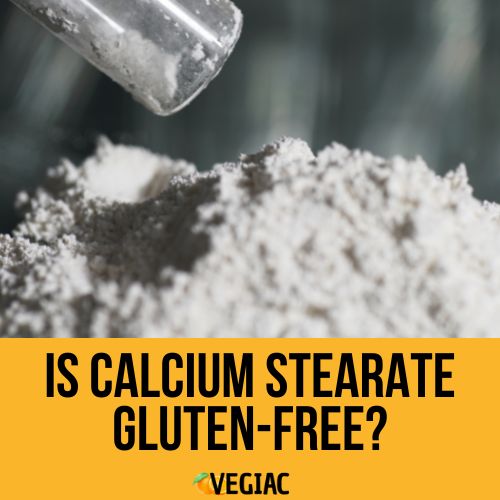 Gluten is not present in Calcium Stearate. Patients with celiac disease or other gluten-related disorders should have no issues with calcium stearate.

Calcium stearate is a kind of calcium carboxylate that is used to make various lubricants and surfactants. It looks like a waxy powder and is white in hue. It is also the main component of soap scum, which is a white solid formed by the mixture of soap with hard water.

Calcium stearate soap, in contrast to soaps containing sodium and potassium, does not dissolve in water and does not produce a good lather. On the market, you can buy it either as a spray-dried powder or as a dispersion in water that is 50%. It is referred to by the general E number E470 when it is used in the food industry.

Why Is Calcium Stearate Not Contaminated With Gluten?

In order to respond to this topic, you must first answer the following questions, what exactly is gluten? Gluten is a protein molecule present in wheat as well as wheat-related crops such as barley and rye.

First, gluten is a protein. Second, gluten is most commonly present in wheat and other cereals that are closely related to wheat. Calcium stearate is something that is quite distinct from protein, as was explained earlier on in this discussion.

So, What Is Calcium Stearate?

It is a synthetic component designated as E470a by the European Union due to its use in the food industry as an anti-caking agent, releasing agent, lubricant, binder, emulsifier, and thickening agent.

In addition, the European Union has designated it as having the designation E470a. In addition to this, it may be utilized in the fields of cosmetics, medicines, and plastics, amongst other areas of business.

Where Can You Find Calcium Stearate?

Animal fats such as lard, mutton tallow, and beef tallow are examples of common types of animal fats that are utilized.

What Kinds of Things Might Calcium Stearate Be Used For?

Its ability to resist water and act as a lubricant, calcium stearate is most commonly utilized in the food, cosmetics, and pharmaceutical industries as an anti-caking agent.

It may be used as a solid-phase lubricant to keep materials and completed items from sticking together due to its ability to absorb moisture.

It is a dough conditioner that is commonly used with other dough softeners such as mono- and diglycerides to function as a free-flowing agent in bread. It is also employed in the curing of pizza dough.

Because of its lubricating capabilities, it is typically put to use. In cosmetics and other personal care products, it prevents emulsions from breaking down into their constituent oil and water phases.

It is an excipient that may be used in the manufacturing of pharmaceutical tablets and capsules in the capacity as a mold-release agent, which helps the equipment to work more effectively. This is one of the ways that it can be used.

Can Calcium Stearate Be Consumed Without Risk?

When calcium stearate is added to food, it has essentially no detrimental effects on the human body. The FDA has determined that it is generally recognized as safe (GRAS) for use in food, with no limitations other than those pertaining to current good manufacturing practice.

It can also function as a lubricant, a release agent, a stabilizer, and a thickening. Flavoring agent and adjuvant are two more likely applications.

Calcium salts of fatty acids, also known as E470a, have been certified for use as food additives by the European Food Safety Authority (EFSA) and are therefore permitted in European goods.

Because there were no safety issues at the indicated usage and consumption levels, the European Food Safety Authority assessed that there was no need to create a numerical acceptable daily intake (ADI) for it.