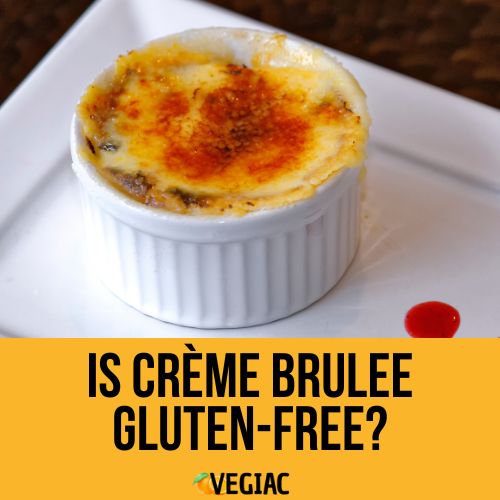 From the most upscale restaurants to more laid-back eateries, Crème Brulee is a dessert that has become synonymous with the idea of luxury and decadence. This creamy, sweet, and indulgent dessert can be found at many types of restaurants and is known for its burnt sugar top that adds an extra flair.

Crème Brulee is generally a gluten-free option for diners to partake in. None of the ingredients that are used for a traditional Crème Brulee contain gluten. The dessert is primarily dairy-based and is typically a safe choice for those who require food to be gluten-free.

This rich dessert is interesting in how it is made and the history behind it. We’ll dive deeper into all you need to know about remaining gluten-free and indulging in Crème Brulee.

What Is Crème Brulee?

Made of a rich custard base topped with a burnt, crunchy shell of sugar, Crème Brulee is a popular and easily recognizable dessert served in restaurants all over the globe. The classic dessert is normally served chilled, although it becomes warmed just a touch by the torch used to caramelize the sugar shell that sits on top.

Crème Brulee has also been known as Burnt Crème or Trinity Crème in various places throughout the world. Traditional Crème Brulee contains a base of vanilla custard.

However, some variations of the creamy dessert have included a chocolate custard base or flavoring the custard with lemon or cinnamon in some parts of the world. The dessert is usually served with a topping of fresh fruit, primarily berries.

Where Did It Originate?

The origin of the beloved dessert is widely contested. Many European countries tout the notion that Crème Brulee originated in kitchens within their borders. Origin stories have emerged from England, France, and Spain, with each country insisting that they created the dessert.

Historians agree that custard was a popular food in the middle ages and without a doubt made its way through the European continent, making tracing the true roots of custard next to impossible.

Trinity College in England claims that the original Crème Brulee was made in their kitchens in the 17th century. A student came up with the dish using burnt crème on which the college crest was burned into the sugary shell topping the custard.

The kitchens at Trinity College are still very well known for making and serving the dessert. However, their version is slightly thicker and less sweet than the one we know in most eateries.

In Spain, the dessert known as Crema Catalana is thought to be the original Crème Brulee creation that all other variations of the dessert stemmed from, according to the country.

However, Catalans created the rich custard base topped with caramelized sugar later in the 18th century after the Trinity College creation.

Spain’s version of the dish is similar in taste to the one that has become popular, but it is not baked in a water bath as most Crème Brulee desserts are.

France is the final country to assume the role of creator of the Crème Brulee. Many people believe that the sweet and decadent dessert must originate from France, given that the name is, in fact, French. The name Crème Brulee means “burnt cream” in the French language.

However, the name for the dessert did not become popularized until the 19th century, well after both the British and Spanish people claimed to have invented the dish.

Whatever the actual origin of the dessert may be, the overall recipe and technique used to make it remain largely the same in kitchens and homes across the world.

Generally, it is gluten-free as long as the Crème Brulee is prepared using the traditional ingredients, including cream, water, eggs, sugar, and vanilla.

However, some recipes also call for additional ingredients that could be gluten-containing. It is crucial to always carefully read the label. It is also important to make sure that you inquire about the ingredients if you plan to eat this dessert at a restaurant.

How Is It Made?

To achieve this, sugar is sifted onto the custard and caramelized using a butane torch or a salamander, a cast-iron disk with a long wooden handle.

The custard can be made using one of two techniques. The more typical method involves whisking egg yolks with sugar and cream in a double boiler to make a “hot” custard. Once the custard is taken off the heat, vanilla is added.

Alternately, you could temper the egg yolk/sugar mixture with hot cream before adding vanilla at the very end. The egg yolks and sugar are whisked together in the “cold” method until the mixture reaches the ribbon stage. The heavy cream and vanilla are then whisked into the yolk mixture. A bain-marie or water bath is used for baking it after it is poured into ramekins.

Can I Make It At Home?

Crème Brulee can easily be made at home if you have the right tools. As mentioned before, the dish is usually served in ramekins which are small, round ceramic dishes that are designed to withstand high temperatures.

Crème Brulee is also traditionally baked in a water bath in the oven. You would need a large baking dish that you can fill with water to place the ramekins in to get the dessert to set correctly.

For the sugary topping, you will need something that can quickly burn the sugar to turn it into that hard, caramelized shell. A butane torch works the best for this and can be found in some cooking stores or hardware stores.

In addition to having the right tools to make Crème Brulee, you’ll also need the correct ingredients, all of which can easily be found at your local grocery store.

Crème Brulee is a beloved, decadent dessert that is enjoyed by people and cultures all over the world. The ingredients and methods used to create the dish are traditionally all gluten-free and can be enjoyed by those that require a gluten-free diet.