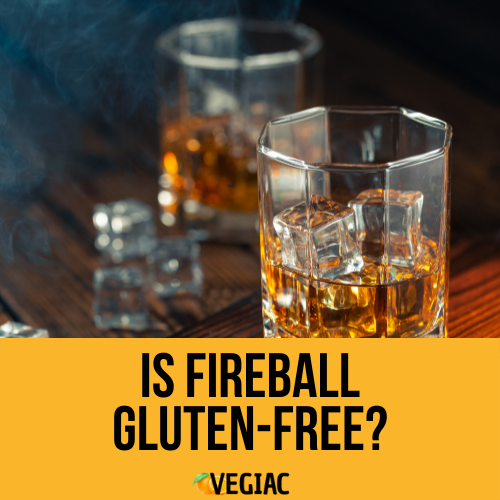 Fireball Whisky is a combination of Canadian whisky, cinnamon flavoring, sweeteners, and more. It is made by the Sazerac Company. It has 33% alcohol by volume, which translates to 66 proof in the United States. It was first made in Canada around 1984, and it was mostly sold in Canada.

Originally, Fireball was one of the flavored schnapps developed by Seagram, and the Sazerac Company purchased it in 1989. It was originally sold as Dr. McGillicuddy’s Fireball Whisky, and then in 2007, it was rebranded as Fireball Cinnamon Whisky.

People drink Fireball as a shot of on the rocks, and it can be added to a mixed drink. It became popular in the United States in the late 2000s, and it became so popular that it replaced Jagermeister as the “go-to” shot. It became a billion dollar brand.

Fireball whisky is popular at bars, parties, and other gatherings. It immediately warms you up, and it is both sweet and hot at the same time. Some say that it tastes like Atomic Fireball candies. The company itself says that drinking it is like standing in front of a fire breathing dragon who has drunk whisky with cinnamon.

People love Fireball because it’s fun. It adds an element of daring to any social occasion, and the combination of sweet and hot is stimulating to the senses.

Fireball whisky might be gluten-free. The company claims that Fireball is considered gluten-free because the process of distillation removes gluten proteins. However, there is debate on how effective this process is. Normally, some who have a strong sensitivity to gluten say that they do become gluten contaminated after drinking a wheat based distilled spirit.

Because it cannot be guaranteed to be gluten-free, people with allergies to gluten or Celiacs should avoid Fireball. In addition, the added flavors, such as cinnamon, can be provided by third parties, in which case the manufacturer doesn’t have control over the process. For this reason, Fireball is listed as “might be” gluten-free.

There are several traditional ways to drink Fireball Whisky. By far the most common ways are in a shot or on the rocks. On the rocks means over ice, and it is a simple way to sip and enjoy this drink. The straight shot is what made Fireball famous, and it has a smooth flavor with a subtle kick and a sweet aftertaste.

You can also try a Cinnamon Toast Shot, which combines Fireball with horchata or Rumchata. Dragon’s Blood is another shot, made with Fireball and cranberry juice. You can also drink this drink on the rocks. Another popular drink is Ciderball, which people say tastes like apple pie. Combine a shot of Fireball with hard apple cider. It will warm you up on a cold night.

Some people cook with Fireball. You can add it to barbeque sauce and eat it over chicken, or flavor our pork chops with it. It leaves your food with a flavor that is spicy and sweet.

This popular whisky is one of the favorite drinks in the United States. Take a look at some interesting facts about it.

1. Fireball isn’t actually whisky. Technically, whisky has to be 40% alcohol in most countries, and Fireball is only 33% alcohol by volume. In Canada, anything labeled Canadian Whisky has to meet the 40% threshold, but they don’t have a rule about products that are simple whisky except that they need to be made from a base of whisky. Because Fireball is made by adding cinnamon to Canadian whisky, they are allowed to call it whisky.

2. Rebranding made Fireball popular. In 2007, they rebranded it as Fireball Cinnamon Whisky, and they came up with a new logo and started a marketing campaign. Between 2011 and 2013, Fireball sales increased by close to $60 million.

3. Fireball contains a lot of sugar. In fact, it has 11 grams in one shot. There is as much sugar in the shot as there is alcohol.

5. There is an app for a Fireball drinking game.

8. It was rated the most popular liquor in 13 states by the app BARTENDr.

Any type of alcohol in large amounts can be harmful for your health. Fireball contains less alcohol than other whiskeys. However, it has a lot of sugar, which makes it taste great. If you drink too much Fireball, or any alcohol, it can cause dehydration and loose stools. In addition, the sugar and mixers can cause weight gain if you drink too much of it. Fireball may taste delicious, but it is unhealthy in large amounts.

Fireball does contain real cinnamon. The company says that they use real cinnamon, but they don’t give further details. The Canadian whisky they use is aged in American bourbon barrels. Another ingredient it contains is propylene glycol. Fireball was actually recalled in three European countries because this ingredient is also found in antifreeze.

However, the FDA allows 50 grams per kilogram in food and drinks, and Fireball contains a lot less than that. It is considered safe to drink in spite of this ingredient.

10 Facts About Fireball That May Surprise Your Inner Dragon | wideopeneats.com