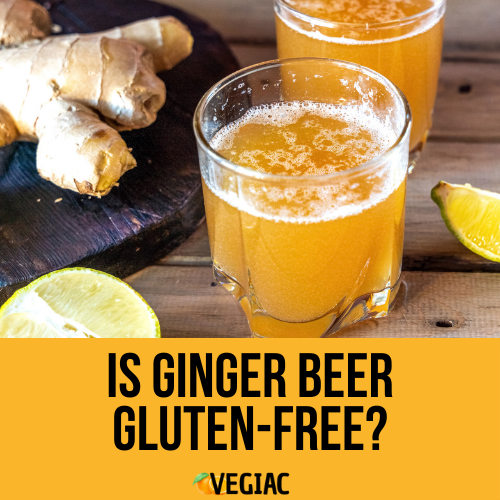 Ginger beer in and of itself is naturally gluten free. It is always important to read the label of different brands on the off-chance there is a gluten ingredient added, or there is potential for cross contamination during manufacturing.

What About The Yeast In Ginger Beer?

Ginger beer contains fermented yeast, which might concern some people with gluten sensitivity. However, the type of yeast used does not contain gluten. This fermented yeast also does not create alcohol, as it doesn’t ferment for long enough.

What Is Ginger Beer?

Ginger beer is a non-alcoholic beverage that is often used as a mixer in various cocktails. It has a very strong flavor with a hint of spice and refreshing bite. It is typically carbonated, making it a nice drink to enjoy on a hot day.

Ginger beer was popularized by England, and started becoming a trendy beverage throughout North America over the past few years. Many might not realize just how old ginger beer is considering how it only became popular throughout the world recently. However, it has been enjoyed in England since the 1700s.

What Is Ginger Beer Used For?

One of the most popular cocktails enjoyed with ginger beer is a Moscow Mule, typically served with vodka and lime in a rose gold mug. It is also used for a Dark And Stormy, mint juleps, and other types of mules. Ginger beer is also a nice beverage to enjoy on its own given its unique and satisfying flavor.

Ginger beer packs a punch in terms of flavor. It has a little bit of a spicy kick, but it’s not heat; it’s more of a flavorful spicy kick. There are also sometimes notes of citrus that complement the spice very well. Since ginger beer often uses fresh ginger instead of diluted ginger syrup, it maintains that very prominent and strong ginger taste.

Ginger beer does not taste like beer at all, despite what the name might make you think. It’s similar to root beer in that is has fermented yeast, but it’s not fermented enough to be alcoholic. However, some brands will have a little bit of alcohol in their ginger beer formula.

Ginger beer and ginger ale both feature ginger, and they are both carbonated. Similarly, they also both have a nice flavor and are refreshing and bubbly. However, ginger beer has a stronger flavor profile with much more spice than ginger ale.

Are There Gluten-Free Brands Of Ginger Beer?

While most ginger beers should be gluten free, there are some brands to take note of if you are concerned about enjoying a ginger beer that definitely does not have gluten. These include:

What Are The Ingredients In Ginger Beer?

The main ingredients that make up ginger beer are ginger, water, sugar, and yeast. The drink is also carbonated before it is packaged. It is also possible that ginger beer can have some citrus added, such as lemon or lime, and it might also have some cream of tartar.

Because ginger beer has become so popular, some shortcuts have been made by some manufacturers to be able to make more ginger beer faster. This might mean the addition of artificial flavors and unnecessary ingredients that make ginger beer less healthy.

The nutritional information for ginger beer will vary depending on what brand you choose. For an example, the following information pertains to one bottle of Bundaberg Ginger Beer:

Ginger is most well-known as a natural remedy for nausea and stomach upset. However, the carbonation in ginger beer could potentially exacerbate the stomach upset. Ginger also has antibacterial and anti-inflammatory benefits, and some studies suggest it can also help improve skin and lower the risk of certain cancers.

Ginger beer is a decent alternative if you enjoy carbonated beverages, but want something that is more flavorful than bubbly water but don’t want to drink too much soda. Of course, once alcohol is mixed in, it is a little bit less healthy depending on how much you drink.

That being said, enjoying an alcoholic beverage responsibly with ginger beer is not going to be a detriment to your health.