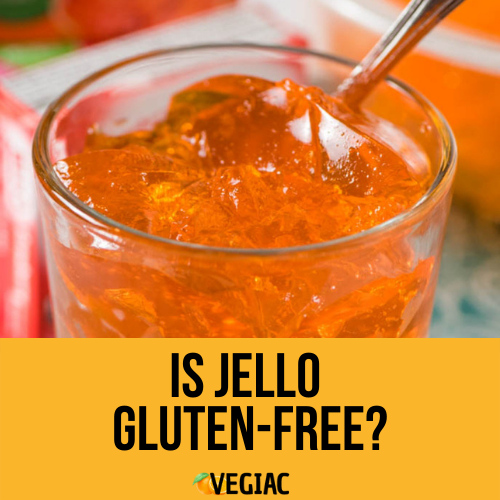 Jello on its own is naturally gluten-free according to its listed ingredients and strict gluten-free protocol used at the Kraft facilities, but it cannot be guaranteed as gluten-free because some of the ingredients are purchased from suppliers who only list the gluten sources that are required by law.

Pre-made jello products are often made in facilities where cross-contamination with gluten-containing products is possible.

Officially, according to celiac.com, Jello is considered “gluten-safe” rather than “gluten-free”. A gluten-safe product contains naturally gluten-free ingredients, although it is not able to officially be labeled gluten-free according to the above reasons.

Gluten-safe products are described as being likely safe for people following a celiac diet. Since not every person eating a gluten-free diet suffers from Celiac disease, if it is listed as gluten-safe for those with Celiac, it is likely to be safe for all gluten-free eaters.

If you’d like to enjoy gluten-free jello, it is best made from the powder in the box at home, rather than bought pre-made in the cups. This way, you are able to control the ingredients that go in and there is no need to worry about any cross-contamination.

If you’re making a no-bake Jello pie, be sure to use a gluten-free crust to make the entire dish gluten-free.

Note: Jello products might also be made in a facility that works with other gluten products, so most brands will not put that the jello is gluten-free on the label. Thus, unless you have a hyper sensitivity to gluten, you should be fine eating jello on a gluten-free diet.

Jell-O is a Kraft brand of gelatin dessert introduced in 1897 that includes pudding, fruit-flavored gelatin, and no-bake pies. Although it is used generically to describe anything that is a gelatin dessert, Jello is actually a brand name.

Jello was more popular in the first half of the century than it is now, as the base of many dishes, both sweet and savory. Congealed salads gained popularity in the 1930s, leading to the creation of the lime flavor to highlight ingredients in the salad.

Jello comes in many different flavors and forms. The most popular flavor is strawberry. The original flavors are strawberry, raspberry, orange, and lemon.

Along with the fruity gelatin dessert, Jello can also refer to Jell-O brand pudding. Chocolate, vanilla, and a mixture of the two are the most popular flavors of Jello pudding, along with butterscotch.

While jello is mostly bought in pre-made cups nowadays, the original way it was made was by mixing the patented gelatin powder and hot water. This is most often done in a jello mold to create fun shapes.

Other foods such as fruit can be suspended inside the jello, as long as it is firm enough.

Jello is a sweet, gelatinous dessert often enjoyed by children, or sometimes by adults mixed with alcohol or made into a dessert. It is also often served in hospitals as it is easy to chew and digest.

Jell-O is also the name of a brand that is known for making jello and other types of dessert mixes, including pudding.

How Was Jello Invented?

The invention of jello is actually a very interesting story. It was made by accident by Pearle Wait in 1897 when he was trying to make a cough remedy and a laxative tea. He added gelatine to his concoction, and jello was born. However, Wait couldn’t make the product take off on his own, so he sold the idea to someone else.

Jello was purchased by Frank Woodward, who also ended up selling it to someone else as he wasn’t able to sell as much as he had hoped. Finally, in the 1900s, Jell-O took off under new ownership with some very smart advertising moves.

What Flavors Of Jello Are There?

Jello can be found in multiple flavors. There were four original flavors, which were lemon, strawberry, raspberry, and orange. Strawberry has been ranked by many as their favorite jello flavor.

Looking at the most popular brand of jello, known as Jell-O, some of the flavors include:

Are There Any Flavors Of Jello That Are Not Gluten-Free?

In terms of Jell-O brand jello, there are currently no flavors of their jello that contain gluten ingredients.

Jell-O brand puddings also do not contain any gluten ingredients. As with jello, there is a possibility for cross contamination within the manufacturing facilities, so discretion is advised based on your own sensitivity.

Why Do People Love Jello?

Jello offers a sense of nostalgia for many who enjoyed the inexpensive, low calorie sweet as a child. It is also easy to eat for anyone who may be dealing with stomach upset or some other type of illness that makes eating regular food difficult.

Why Do People Eat Jello When They Are Sick?

Jello is a translucent food, which is often recommended for those who are dealing with numerous illnesses. The sugar content can also be good for those who are having trouble eating or haven’t eaten for a long time. Jello is also gentle on the stomach.

What Are The Ingredients In Jello?

The ingredients in jello will vary depending on the brand and the flavor. As an example, Jell-O brand jello in orange contains the following ingredients:

Why Are Some People Wary Of Gelatin?

Gelatin is one of the essential components of jello. It is derived from animal bones and other animal parts. This makes some uncomfortable, but there is nothing inherently bad about gelatin. In fact, studies suggest there are actually benefits to eating gelatin, including improvements in bone and joint health, as well as potential to improve the look and feel of skin.

That being said, jello doesn’t contain enough gelatin to see many of these potential benefits come to fruition.

The following nutritional information pertains to one serving of orange jello, which is considered to be ¼ of the prepared package.

Jello would not be considered healthy, despite the fact that it is easy to eat and contains few calories. Many opt for jello when they are craving something sweet but don’t want to indulge in the caloric intake that traditional desserts offer, so they’ll pick up some jello.

However, jello contains a lot of sugar, and not much else in terms of nutrients or minerals that are part of a balanced diet. There is sugarless jello available, but it contains artificial sweeteners, which isn’t much better than regular sugar.

The artificial colors and ingredients in many jello flavors are also not good for general health, especially if eaten in high quantities. All that being said, there is nothing wrong with enjoying a nice, sweet cup of jello occasionally for a sweet treat.