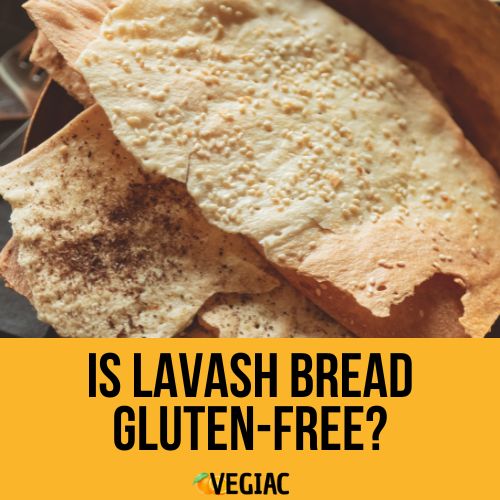 These days, many people are discovering they have some form of gluten intolerance, and many more are choosing to go gluten-free as part of their health conscious lifestyle. But going gluten-free can be tricky, especially determining what has gluten and what doesn’t, and how to enjoy your favorite foods.

For more about lavash bread and gluten content, keep reading.

Traditionally, lavash bread is not gluten-free. Most original recipes have wheat flour as a primary component.

What Is Lavash Bread?

Lavash bread is a traditional form of flatbread primarily found in Southeast Asia, and the areas around the Caspian Sea. It’s a thinner form of unleavened flatbread than some other recipes, and has a variety of uses.

Lavash is often used in various wraps to enjoy any number of foods. You can put just about anything you want in a lavash wrap, from dessert fillings to traditional Middle Eastern dishes.

How Is Lavash Bread Made?

Lavash bread is usually made with wheat flour and water, and sometimes a little bit of salt.

The dough is rolled into balls and flattened out into thin flat circles, which are then stretched over an oval cushion.

For traditional baking, they are then slapped onto a conically shaped clay oven often called a tandoor.

After 30 to 60 seconds, the bread is generally ready to be removed from the oven.

How Can I Make Lavash In A Modern Kitchen?

Mix the dough in a small bowl.

Coat the dough with oil and separate into small balls, then flatten them into thin sheets..

Preheat an oven to 400 degrees Fahrenheit.

Prior to baking, you can sprinkle the dough with sesame seeds, or other flavorings/toppings of your choice.

If the dough is left longer, then it can be formed into thin, crispy crackers, as opposed to flexible bread for wraps.

Aside from the basic what flour and water, other types of flour or seasoning can be added for different flavors:

– An ‘old dough’ or sourdough technique can be used, in which some of the dough from one batch is saved and incorporated into the next batch of dough

– Cumin is also a popular flavoring in the Middle East

There are actually very few things that cannot be added to lavash bread for flavor, which is one reason it’s favored for its diversity.

Are There Any Gluten-Free Options For Lavash Bread?

With the rise of enthusiasm for gluten-free foods, gluten-free alternatives have been developed for many things – including lavash bread.

What Kinds of Flour Are Used in Gluten-Free Lavash Bread?

If you’re looking for gluten-free lavash, or planning to make your own, you can use the following types of flour:

All of these are valid gluten-free substitutes for the wheat flour or all purpose flour that is usually used for traditional lavash bread.

How Does Lavash Compare to Other Flatbreads?

Almost any form of flatbread can be made with either flour or a gluten-free substitute. But how do they compare nutritionally in other aspects?

Tortillas generally have more oil and are more chewy.

Lavash, on the other hand, is flatter and more like crackers.

Naan is a leavened flatbread made in Asia.

What Else Should I Know About Lavash?

Traditionally, lavash bread is not a gluten-free item, and makers of original style lavash bread are probably using wheat flour, so be sure you check the label if you have a sensitivity to gluten.

On the other hand, today’s growing market for gluten-free substitutes to popular products means that more lavash bread makers are offering gluten-free alternatives made with ground nut flour, flaxseed, or other flour alternatives.

Lavash is also a fairly simple recipe to make, so if you want a gluten-free lavash wrap that’s perfect for you, you can find plenty of recipes to help you make your own with the gluten substitute of your choice.