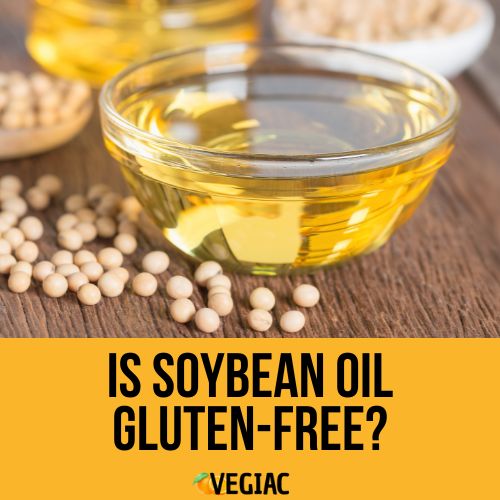 If you’re looking to fry or sautee a nice meal over the stovetop, but have chosen to remove gluten from your diet because of an allergy or personal choice, you may want to use soybean oil. The question is: is soybean oil gluten-free?

Because soybean oil only contains fatty acids and does not include any of the common sources of the gluten protein, such as wheat or barley, soybean oil is considered gluten-free. As a gluten-free product, soybean oil can safely be used and ingested by those with celiac disease or a gluten allergy.

In this article, we’ll cover how to tell whether or not soybean oil is gluten-free, including what gluten is and what soybean oil contains, and go over some frequently asked questions related to this topic!

How To Tell If Soybean Oil Is Gluten-Free

In order to know for sure whether or not soybean oil is gluten-free, it is important to understand what gluten actually is and why it might be avoided, as well as what soybean oil is and the ingredients involved in making it.

What Is Gluten And Where Does It Come From?

Gluten is actually the name of a protein. This protein is generated and found inside of certain types of grain, but it can also be found in some other ingredients, including:

Gluten is beloved as an inclusion in some of these food sources simply because it acts as a binder, a type of sticky substance that can keep food consistency stable and prevent tearing in dough.

However, gluten is avoided by some because, although it does count as a source of protein, it can wind up being a source of discomfort and damage to a body that reacts to it poorly. For example, those with celiac disease can suffer from inflammation, uncontrolled weight loss, and many worse symptoms.

This is the result of the human body identifying the gluten protein as a threat and attempting to expel it. This is why celiac disease is classified as an “autoimmune” disease: the immune system actually causes the body problems by trying to perform it’s function incorrectly.

For this reason, many opt out of gluten in their diet entirely. Luckily, some recipes can substitute things like wheat flour, which contains gluten, with healthy alternatives, such as corn starch or potato flour. However, it is important to understand the ingredients behind some products, like soybean oil, to be sure that they don’t contain gluten before ingesting them.

Are There Ingredients Containing Gluten In Soybean Oil?

Now that we’ve covered gluten’s food origins, the question is, does soybean oil contain any of them? Listed below are the ingredients found in soybean oil:

Soybean oil is actually considered healthy, thanks to it’s richness in omega-3s, lowering the risk of heart disease and high blood pressure. Not only that, but as you can see above, none of the fatty acids found in soybean oil are a source of gluten. Neither are the soybean seeds which the oil is extracted from! Therefore, we can conclude that soybean oil is gluten-free!

Below are some frequently asked questions related to soybean oil and their role as a gluten-free ingredient!

Why Is Soybean Oil Not Gluten-Free?

Soybean oil actually is gluten-free, thanks to the fact that it does not contain any of the gluten-producing grains like wheat or rye. Instead, soybean oil is extracted from the seeds of soybeans.

People with celiac disease should experience no discomfort from eating an actual soybean, since it does not contain any gluten. However, this does not mean that all soy products are gluten-free. Some soy products, such as soy sauce and teriyaki sauce, have added ingredients that do contain gluten and therefore are not safe for celiacs to eat.

What Oil Is Gluten-Free?

There are many oils which are actually gluten-free, meaning they do not contain grain ingredients that are responsible for producing the gluten protein. These include: canola oil, olive oil, sunflower oil, and of course, soybean oil or vegetable oil.

Soy frying oil, otherwise known as vegetable oil or soybean oil, is indeed gluten-free and safe for frying oils made by those that strive to keep gluten out of their diet! Soybean oil may contain many fatty acids, but it holds none of the grain products that bring gluten into a dish.

Inflammation usually occurs because the body’s immune disease is trying to get rid of something harmful. In the case of some foods, like gluten, the body can react as if it is being poisoned and cause the bowels to become inflamed.

Luckily, soybean oil does not contain gluten, and therefore soybean oil is not usually inflammatory.

Is Soy And Soybean Oil The Same?

Soy comes from the legume soybean. This legume can be used to make many other products, which are then called soy products, and soybean oil is one of these. Soybean oil is the extracted fatty acids from the seed of a soybean.

Can You Have An Allergic Reaction To Soybean Oil?

Commonly, soybean oil is classified as non-allergenic as long as the oil is fully refined, meaning it does not usually cause allergic reactions. Particularly in those with a gluten allergy, soybean oil is safe because it does not contain any grains that might produce gluten.

Why Is Soybean Oil Not An Allergen?

The only kind of allergic reaction common to soybean oil occurs in those with a soy allergy. This is because soybean oil does not contain anything except fatty acids gleaned from the seed of a soybean, meaning it does not aggravate dairy or gluten allergies.

In conclusion, soybean oil is not gluten-free because it does not contain any of the food items that produce the gluten protein, like barley, wheat, or soy sauce. Instead, the soybean oil is simply taken from a soybean seed and made up of several fatty acids. This makes soybean oil a great gluten-free option for those looking to cut gluten out of their diet!