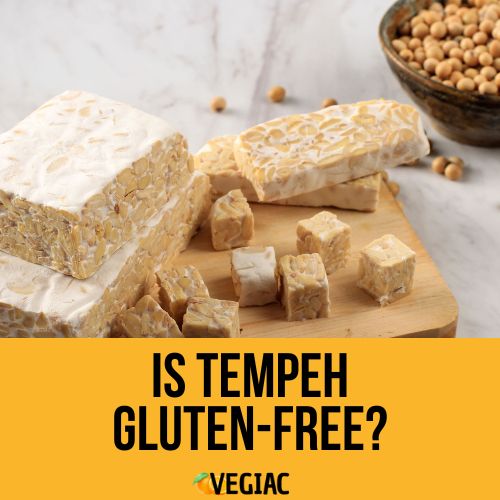 If you don’t eat meat, you probably are familiar with tempeh or have at least heard of it. It is a popular meat substitute in a lot of recipes for vegetarians. For those vegetarians or people trying to cut back on meat that is gluten intolerant, you may be wondering if tempeh contains gluten and is safe to eat.

The answer to that, unfortunately, is not so straightforward. Tempeh, in its traditional form, is made from just soybeans and vinegar. However, many store-bought options today contain other grains along with the soybeans that may contain gluten.

We’ll explore how tempeh is made and what exactly gluten is to help you make the best decision for yourself when you’re looking to implement soybean-based food into your diet.

As we stated before, traditional tempeh is usually gluten-free, containing only vinegar and soybeans. The processed and packaged tempeh in most stores today contain added grains to make it heartier tempeh taking away the gluten-free label.

When purchasing tempeh, you have two options: products that may have additional herbs, spices, and flavors added to them, as well as plain tempeh, which is a blank slate.

To be sure, you should check the product’s packaging for an ingredient list or a list of allergens. Typically, immediately after the list of ingredients and “Contains,” the allergens are listed. The item is not gluten-free if it contains any of the following: wheat, barley, or rye.

If you’re going to order tempeh in restaurants, you should also think about any additional ingredients that might be used that could prevent the dish from being gluten-free. Soy sauce, miso, and oats are a few of these unmarked ingredients.

Barley, rye, and most prominently, wheat all belong to the family of proteins known as gluten. Gluten is essential to the plant because it aids in providing food to developing seedlings. Through the ages, people have developed countless clever ways to eat gluten for nutrition.

Gluten is a group of hundreds of individual proteins, but only two of them, gliadin and glutenin, are important for cooking. Both of these proteins are found in wheat flour. Glutenin makes dough stretchy and elastic, while glutenadin helps dough capture air bubbles as it cooks, causing the bread to rise.

Only after these proteins in the flour are exposed to moisture during the making of dough does the gluten become active. Because flour and water are incorporated into one another more quickly during mixing, gluten development is accelerated.

The gluten proteins are arranged over time by proteases into a web-like structure with intertwined strands. Wheat dough is stronger and more flexible than gluten-free dough because of this structure.

What Is It, And How Is Tempeh Made?

Tempeh is a food that originated in Indonesia thousands of years ago as a soy product used for its heartiness in dishes. It is made by combining soybeans with vinegar in a well-thought-out process that takes some time to get to the final product.

To easily remove the hulls, soybeans are first soaked before being used to make tempeh. The fermentation process then begins after they have been partially cooked.

When ready, a Rhizopus oligosporus or Rhizopus oryzae starter for tempeh is added to the soybeans and allowed to sit. The fungus surrounds the soybeans as they ferment, giving the product a cake-like texture.

The fungus typically takes 24 to 36 hours to form, and the tempeh is typically ready in 48 hours.

By then, the beans ought to have been shaped into a dense cake that was completely covered in a white fungus that concealed the beans from view. It ought to have a pleasant aroma like mushrooms.

Purchasing packaged tempeh from the store is the simplest way to incorporate it into your meals. Just be sure you are checking the labels for gluten-containing ingredients beforehand.

Tempeh is an incredibly healthy food that contains tons of nutrients that benefit you and your overall health. Adding it to your meals can be a great addition to a well-balanced diet. Below are just some of the benefits of tempeh:

Tempeh is packed full of nutrients that are great for your body. It contains tons of vitamins, protein, and minerals while remaining low in sodium and carbohydrates.

Since it is packed more densely than some other meat alternatives, it provides more protein than most. It also provides you with iron, calcium, riboflavin, niacin, magnesium, phosphorus, and manganese.

Sugars are broken down by bacteria and yeast during fermentation. Phytic acid in soybeans is broken down during the fermentation process, which aids in better absorption and digestion.

Fermented, unpasteurized foods may include probiotics. These are healthy bacteria that might improve health when consumed.

Tempeh is a probiotic food that affects the microbiome in your gut. Your digestive system’s bacteria make up your gut microbiota. Additionally, it appears to be high in prebiotics, a class of fiber that helps the good bacteria in your digestive tract grow.

It May Help Reduce Cholesterol

Soybeans, which have isoflavones and other naturally occurring plant compounds, are traditionally used to make tempeh. Low cholesterol levels have been linked to soy isoflavones.

Adding tempeh to your well-rounded diet may help lower the levels of bad cholesterol in your system, leading to better overall health.

What To Cook With Tempeh

This soybean-based food can be swapped in for tofu in recipes when needed or if you want a different taste and feel to the dish. It can also be used to mimic a ground beef texture in dishes that may call for red meat. It crumbles easily and “browns” up in a pan well.

Tempeh can also be cooked on its own as a main dish. It holds marinades well and will absorb a lot of the flavor, making it a versatile food.

Tempeh is a wonderful option for vegetarians and those that want to eat less meat. It can also be a great option for those needing gluten-free options. However, it will require some research to find the brands that do not add gluten-containing grains.

With a little searching, you can find more traditional versions of tempeh and make tasty and hearty dishes the family will love!