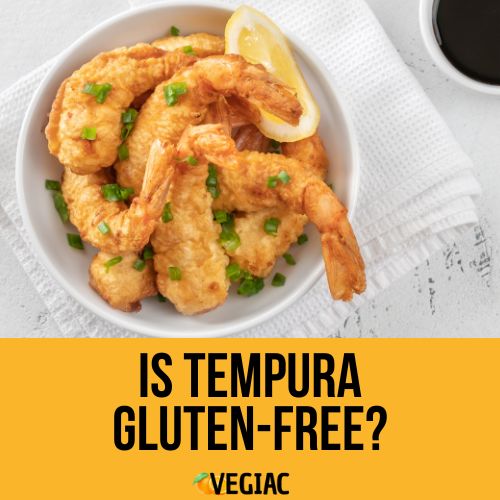 Handling a gluten-free diet can be taxing, especially if you’re looking into trying a delicious fried food dish in the style of tempura! The question is, is tempura gluten-free?

The traditional recipe for tempura includes a type of wheat flour, which contains gluten. Therefore, unless the wheat ingredient is replaced, tempura is not gluten-free.

As disappointing as tempura’s gluten ingredient may be, it is encouraging to note that there are gluten-free recipes if you’re craving this fine fried style! In this article, we’ll analyze what tempura is, what disqualifies it from being classified as gluten-free, and how to substitute it’s gluten ingredients!

Tempura is a hot Japanese dish in which any food, such as seafood, sushi, or vegetables, is fried in a particular way. The tempura style of frying includes a very light, crispy batter, unlike the heavier Western style of thick fry coatings.

Because of the light characteristics of tempura batter, the preparation of foods being battered in the tempura style is thought of as a glaze. In contrast to other batter recipes, tempura uses only a small amount of oil and no breadcrumbs at all.

Typically, the invention of tempura is credited to Japan, though some speculate it was originally a Portuguese method of preparing food. Whatever its origin, tempura is a difficult but rewarding technique of frying.

One of the most beloved benefits of tempura is its simplicity. Tempura batter only has three ingredients: an egg, flour, and ice water. It can usually be bought as a boxed mix, however, it is possible to create it at home from scratch thanks to it’s minimal ingredients!

Tempura is actually known for promoting a slow gluten formation in its batter. This is thanks to the ice water that maintains tempura’s light and fluffy consistency, as well as repelling much of the oil that characterizes heavier, Western-fried dishes. However, no matter how slowly it forms, gluten is still present in tempura. This is the fault of the wheat in the recipe.

Which Ingredient in Tempura Has Gluten?

When craving the light, crispy effect of tempura, but sticking to a gluten-free diet, it can be helpful to know just what keeps tempura from being gluten-free.

Two of tempura’s traditional ingredients, an egg and ice water, do not contain gluten. It is the third and final ingredient, wheat flour, which is to blame.

According to WebMD, the protein gluten is plentiful in wheat flour. Wheat flour is one of the most commonly used ingredients in the world thanks to not only the thickness it provides in batter mixtures, but the enriched iron and vitamins that are present in the flour, too.

Overall, wheat flour is high in gluten. It’s content usually consists of as much as twelve to fourteen percent gluten. This is helpful when baking, because it gives any dough a firm elasticity that keeps its shape.

Though wheat flour’s consistency can be substituted in most batter recipes using almond flour, buckwheat flour, and rice flour, these vitamins and minerals are harder to replace. However, tempura batter is specifically designed to be light and thin rather than to hold a shape. Therefore, some gluten-free flour substitutes are preferable to wheat flour in tempura!

How to Make Gluten-Free Tempura

Luckily for lovers of lightly fried Japanese food, there is an alternative to the wheat flour commonly used in tempura. The most important thing to remember is that tempura is characterized by a very thin batter. For this reason, rice flour is the best gluten-free substitute for a typical wheat flour tempura recipe!

Lets take a look at the steps to creating a delicious tempura recipe without gluten.

After following these steps, you should have a healthy, delicious, gluten-free tempura mixture to fry to your heart’s content!

In summary, the answer to the question, “is tempura gluten-free?” is: no, tempura is not gluten-free. It’s ingredients include wheat flour, an egg, and iced water. Because of the wheat flour used in the typical tempura batter recipe, most tempura dishes you will find at a Japanese restaurant will contain gluten.

Luckily, there are substitutes for the traditional tempura recipe. If you are looking for a gluten-free option, try substituting the light and fluffy rice flour for wheat flour, and you’ll be enjoying this crispy Japanese favorite in no time!