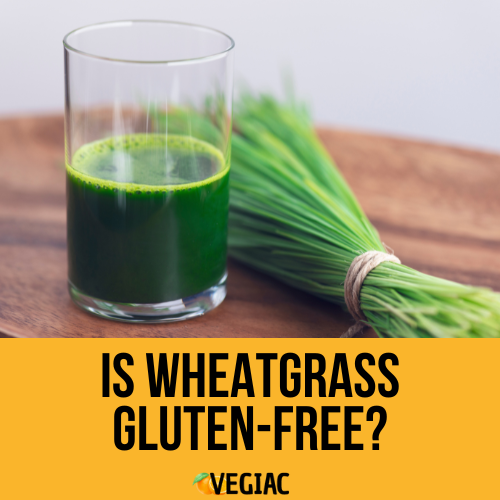 Wheatgrass is a type of grass that is naturally gluten-free. This may be surprising to people who avoid gluten in their diets as wheatgrass comes from the same plant as wheat, which does contain gluten.

Wheatgrass is the young leaves of the wheat plant. When you think of a field of wheat, you tend to picture tall yellow crops filled with grains rather than the juvenile wheatgrass. Wheatgrass is the bright green shoot that grows straight out of the ground before the wheat grains have had time to mature and develop their gluten.

When wheatgrass is harvested, the grains are present, but they are still very low to the ground and are not collected along with the green leaves.

Another cause for concern is the manufacturing process. Farms that produce wheatgrass usually also produce wheat products. If they harvest, process, and store wheatgrass alongside gluten-containing products then there is a high likelihood of cross-contamination.

To be safe, it is best to only use wheatgrass products which have been certified as gluten-free. This means the product contains less than 20 parts per million of gluten, which is significantly below the danger threshold for people with gluten intolerance or celiac disease.

Triticum aestivum is the technical name for the common wheat plant. Its young shoots are known as wheatgrass. Fresh wheatgrass can be blended into a juice, and if fresh isn’t available, powdered forms can also be shaken with water to make juice.

It’s not uncommon in 2022 to see wheatgrass growing on a window ledge in a trendy juice bar or even a home kitchen. The shoots grow quickly and can be harvested just a few days after planting them. Once the leaves have begun to mature, they can be picked, and new seeds planted to continuously grow wheatgrass.

Wheatgrass juice is certainly an acquired taste. It has an unusual dark green color and a grassy flavor. Some people have even equated the taste to “pond water”. But many people don’t drink wheatgrass for its flavor. They drink it because it boasts a range of health benefits.

Wheatgrass has rapidly taken its spot on the superfood podium thanks to its high levels of vitamins, minerals, enzymes, protein, and fiber. It is often recommended as a supplement in people who are working on weight loss as it helps with digestion and boosts the metabolism. Because wheatgrass is so nutrient-dense it helps to curb the appetite and reduces cravings for sugar and refined carbohydrates.

But the history of wheatgrass goes back many years before it emerged during the 1930s as a superfood in the West. Wheat seeds are a sacred part of the Hindu Navaratri festival which takes place every autumn. The seeds are sown at the beginning of the festival where they are allowed to grow before being offered to the mother goddess.

Wheatgrass contains only one ingredient: wheatgrass!

It is very unusual to find any other ingredients added to wheatgrass, especially when it is in powdered or fresh form. Some brands may use wheatgrass alongside other microgreens in a juice mix.

Wheatgrass is an excellent source of many essential nutrients. It is very low in calories, contains no fat whatsoever, and is high in protein gram-for-gram. It also contains lots of fiber which helps to control cholesterol levels, balances blood sugar, and maintains bowel health.

Vitamin K contributes to normal blood clotting and wound healing, and iron helps maintain energy throughout the day. Calcium is a mineral commonly found in dairy products and fortified plant-milks. It helps to protects bones and teeth from damage and maintains healthy red blood cells. Wheatgrass contains around 3% of your daily amount of calcium.

The table below summarizes the key micronutrients in a shot of wheatgrass juice:

Although wheatgrass is technically gluten-free, there are some risks associated with gluten-contamination during harvest and processing. Gluten-free wheatgrass brands do exist and it’s easy to grow wheatgrass yourself to ensure no contamination happens.

Although wheatgrass is packed full of nutrients there are lots of other, safer, foods which make excellent sources of micronutrients without the risk of gluten contamination.