What Does Gluten Friendly Mean? 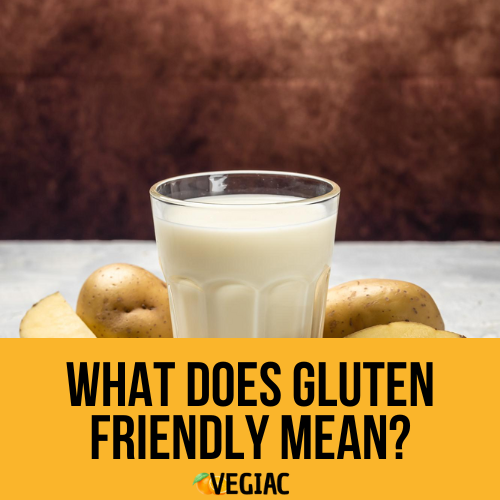 Checking food labels is a habit for most people on a gluten-free diet. However, many are confused about the difference between gluten-free and gluten-friendly. Are there differences between the two, or do these phrases mean the same thing?

Gluten-friendly doesn’t have a set definition. Suppose a food item labeled as gluten-friendly causes a reaction. In that case, the food brand has no legal liability, unlike if they labeled it gluten-free. Essentially, gluten-friendly means it’s probably safe on a gluten-free diet— but there’s no guarantee.

That means, even though something has a gluten-free label, those with severe gluten reactions should still be careful. It’s essential to check the ingredients before eating these types of foods. There’s more you’ll want to learn, so make sure to keep reading.

So, what does gluten friendly mean then? Here’s the best way to define it:

You must be careful when eating gluten-friendly foods if you have Celiac disease. While the food probably doesn’t contain direct gluten, you can’t be sure that it didn’t make contact with foods that did.

You’ll see the phrase gluten-friendly on many menus at restaurants that offer gluten meals. For example, IHOP uses it on its menu to indicate its gluten-free options. However, since they prepare many other items in the same kitchen that do contain gluten, the cooks can’t guarantee that your meal didn’t make contact with gluten.

So, if IHOP were to use “gluten-free” on their menu, they could get sued when someone has a serious reaction. In short, it’s safer for most restaurants to use the phrase “gluten-friendly” on their menus. The phrase means they can’t guarantee your meal didn’t come into contact with other gluten-containing items.

Since there’s no standard for gluten-friendly foods, that also means that they can contain trace amounts of gluten. The phrase “gluten-friendly” isn’t legally binding like “gluten-free” is, which means there might be gluten in the food.

The government doesn’t regulate gluten-friendly foods like they do gluten-free ones. It means there could be small amounts of gluten in the food, or it made contact with a surface that previously had gluten-containing foods on it.

The similarities in the phrases can be very concerning for those who have serious reactions to gluten. You should ask the staff at restaurants questions if you have concerns. Most places will ensure that your meal doesn’t make contact with gluten, as long as you let the staff know ahead of time. If they can’t guarantee that your meal will be gluten-free, those with serious allergies should avoid eating it.

You must understand cross-contact when you have gluten allergies. Cross-contact is when a gluten-containing food transfers gluten to a food that’s supposed to be gluten-free. This process makes it unsafe for those with Celiac disease to consume. It’s important to note that cross-contact can happen anywhere— at home, in restaurants, or even at packaging plants.

Gluten is likely to cross-contact with foods prepared on the same surface. Since gluten is a protein, you can’t kill it like you can bacteria. That means gluten can remain on surfaces for longer amounts of time, causing gluten-free foods to become contaminated with it.

If a restaurant says its food is gluten-free, you can trust that it didn’t make contact with gluten due to government regulations. However, you can’t say the same about gluten-friendly foods, so you’ll need to be careful.

Overall, cross-contact can happen anywhere without you noticing. When on a strict gluten-free diet, you’ll need to ensure you don’t accidentally expose your food to gluten.

Gluten Friendly Food is Safe for Most People

Despite the possibility of cross-contact, gluten-friendly food is safe for most people. It won’t harm someone trying out a gluten-free diet since the amount of gluten in the food is minuscule. You won’t react to gluten-friendly meals if you don’t have severe reactions to gluten.

However, if you have Celiac disease, you could still react to gluten-friendly food exposed to gluten. Even though gluten-friendly sounds safe, it’s still a significant risk for those with severe reactions to eating trace amounts of gluten.

Overall, just because a meal is on the gluten-friendly section of the menu, you shouldn’t assume it will be gluten-free. Doing so can be extremely dangerous for those with high gluten intolerances.

Plus, many people consider the following healthy foods to be gluten-friendly:

These foods are very high in protein and are healthy when you eat unprocessed versions. You can use them to create very healthy diets, as they are high in nutrients too. However, gluten-free and gluten-friendly foods overlap quite a bit, so one’s not healthier than the other (unless you can’t eat gluten at all). In short, you can easily have a healthy diet while eating gluten-friendly foods.

To summarize, gluten-friendly means that the food shouldn’t contain gluten; if it does, it’s a minimal amount. It also can mean that the food came from a kitchen that makes other gluten-containing dishes, which can easily lead to cross-contact. It’s generally unsafe for those with Celiacs, although those with mild reactions might not notice anything.