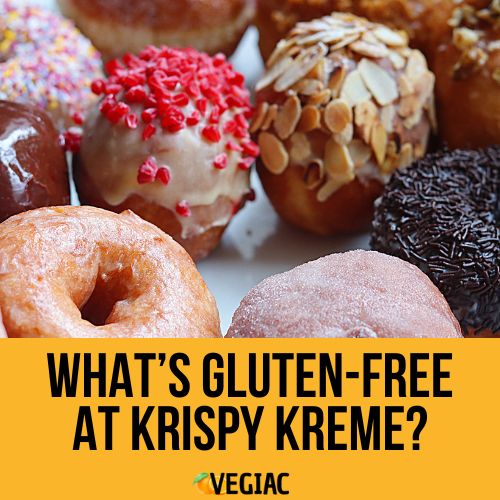 It’s no secret that the folks at Krispy Kreme make some of the best donuts under the sun.

But are they gluten-free?

Are even just a few of the Krispy Kreme donut options gluten-free?

Unfortunately – and we hate being the bearer of bad news here – none of the donuts that Krispy Kreme makes our gluten-free (or even close to it).

Now, that doesn’t mean that you’re not going to be able to find anything at Krispy Kreme that is gluten-free. It’s just that you’re going to have to steer clear of their legendary donuts to keep your celiac or sensitivity to gluten from flaring up.

Sorry Folks, the Donuts at Krispy Kreme Are NOT Gluten-Free

Yup, you are reading that right – absolutely none of the donuts made at Krispy Kreme are gluten-free.

As if that wasn’t already pretty terrible news, though, things get even worse when you learn that Krispy Kreme has no plans to start making any of their donuts (including their incredible, world-famous glazed donut) gluten-free anytime soon.

In fact, Krispy Kreme has been pretty upfront and honest about the fact that they don’t have any plans whatsoever to tinker or toy with their donut recipe just to make sure that it would be gluten-free.

They don’t even want to fool around with possible gluten-free alternatives that might taste a little different than their regular donuts.

At least not right now, anyway.

Maybe this changes in the future. Maybe not. But as of late 2022 you’re not going to be able to get any donuts from Krispy Kreme that don’t have gluten in them.

What’s Gluten-Free at Krispy Kreme, Then?

Fans of the coffee drinks available at Krispy Kreme are going to be happy to learn that almost all of them are totally gluten-free, though.

The “rich brewed coffee” that helped put Krispy Kreme on the map is verified free of gluten, just the same as the “smooth brewed coffee” and decaf options for both of them.

Cappuccinos, most every latte (caramel, vanilla, mocha, caramel mocha, hazelnut, etc.), and the iced coffees that Krispy Kreme makes are going to be free of gluten as well. That goes for the “skinny” versions of these drinks to boot.

Are you a big fan of the “Chiller” drinks that Krispy Kreme makes and would be absolutely heartbroken if you discovered that they had gluten in them?

Worry not! You’re in the clear with the strawberry and the lemonade chiller options. They are good to go.

What about the incredible Ghirardelli hot chocolate that they make, though?

Certainly something so delicious, so decadent, and so velvety and chocolatey has to have a little bit of gluten in the mix, right?

The hot chocolate that Krispy Kreme makes is all clear for those with celiac or sensitivity to gluten, too.

If you have been hoping to grab a box of K cups from Krispy Kreme you won’t have anything to worry about, either. Almost all of them available for sale right now (as of late 2022) are free of gluten.

We know it’s not the best news in the world to discover that Krispy Kreme has not yet jumped on board the gluten-free bandwagon, at least not yet anyway.

It’s also not super encouraging that this company (unlike a number of others that also don’t have a gluten-free menu yet) is pretty upfront, pretty honest, and about as transparent as can be about not having plans to go gluten-free in the foreseeable future.

At the same time, though, it’s not hard to understand this perspective from the folks at Krispy Kreme.

They’ve built a major business on the back of their iconic donuts, donut recipes that they (understandably) don’t want to tinker or toy with. The last thing they want to do is fool around with gluten-free options that might not be as successful as – or as tasty as – there regular Krispy Kreme donuts, tanking the brand with this deviation.

Maybe they come up with a big breakthrough in the next couple of years that allows them to copycat all of their iconic donut recipes without having to include any gluten – all without losing any of the flavor, any of the texture, or any of the “chew” that their donuts with gluten include.

If they can pull that off successfully you had better believe they’d likely be the first people scrambling onto the gluten-free bandwagon, rolling out alternatives that won’t upset those with celiac disease or sensitivity to this core donut ingredient.