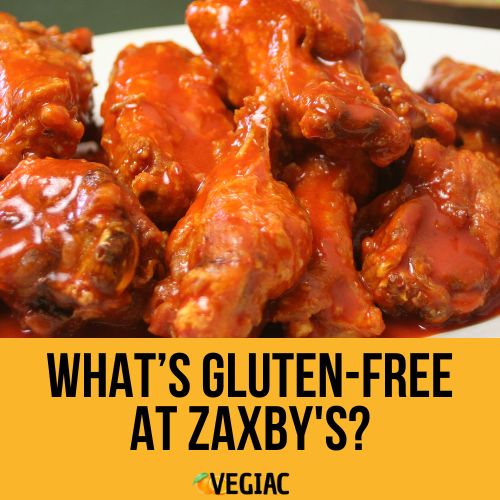 One of the fastest growing fast food chains in the United States, Zaxby’s was started back in 1990 by professional drummer with a dream to create the “next big thing” in fast food chicken.

The very first Zaxby’s opened up as an 800 square-foot operation near Georgia Southern University and exploded in popularity almost right from day one. Zaxby’s started springing up near southern colleges left and right, and today it’s a major force in the food industry (and is ranked one of the top 200 biggest franchise systems on the planet).

All that said, how well does Zaxby’s and their downright delicious chicken fair with folks that suffer from celiac disease or have especially strong sensitivities to gluten in general?

Truth be told, Zaxby’s kind of struggles when it comes to gluten-free options (right now, anyway) – but that doesn’t mean there aren’t any gluten-free choices for you to pick and choose from.

In an effort to be totally transparent, you’ll have a bit of an uphill battle finding all kinds of gluten-free options at a Zaxby’s today.

Folks that have allergies to gluten (or suffer from celiac disease) are going to face pretty slim pickings with the standard menu at every Zaxby’s in the country as of late 2022. There are some options available – and many of them are downright delicious – but you’re certainly going to be picking from a much smaller menu.

On top of that, a lot of the stuff that Zaxby’s makes gets cooked up in the same equipment. That means even the actual gluten-free options may be suffering from “cross-contamination”, and that might be something that causes you to shy away from grabbing lunch or dinner here.

All that said, we wouldn’t be shocked if Zaxby’s finds a way in the near future start rolling out more GF options.

The gluten-free (GF) community is growing larger and larger every day. Customers are demanding GF options and are willing to vote with their dollar, so to speak, with restaurants that meet their needs.

If Zaxby’s hopes to continue their rate of explosive growth they’d likely already identified this blind spot in their restaurant business and may even have in-house plans to remedy the situation going forward.

We just don’t know, not yet anyway. There’s been no word that this is a direction their moving in going forward.

Now that we have all of that out of the way, let’s dig a little bit deeper into the actual gluten-free choices you’ll be able to pick from at a Zaxby’s.

For starters, the salads that Zaxby’s offer – the side salad, anyway – is guaranteed not to have any wheat or any gluten ingredients whatsoever. If you start to add different kinds of chicken to the dish you might add some gluten inadvertently, so those that want to stay really strict GF are encouraged to eat the salad “as is”.

Almost all of the dressings for the Zaxby’s salad are GF, though.

The blue cheese and the Caesar are good to go. The honey mustard, ranch, light ranch, Mediterranean, vinaigrette, and Thousand Island are all GF as well. That gives you plenty of different choices to dress up your Zaxby’s salad most anyway you want without having to trigger any negative reactions.

Let’s not pretend, though, that Zaxby’s isn’t known all over the country for their downright delicious chicken. It’s the cornerstone of the restaurant and the number one selling point for folks that are looking for something to eat.

Are any of the chicken choices from Zaxby’s GF?

You can eat them “naked” without any sauce or you can dress them up and not have to worry about adding any gluten into the mix, too. The wimpy sauce, the tongue torch sauce, the nuclear sauce, the insane sauce, as well as both the HHM and BBQ sauces are all GF for sure.

Even the Zaxby’s Original sauce (maybe the tastiest of all the Zaxby’s sauce options) is gluten-free!

Just remember what we said a moment ago, though. The wings at this restaurant are going to be cooked in the exact same fryer that a lot of other Zaxby’s chicken dishes are, and some of them are going to have gluten or wheat. You run the risk of (very minor) cross-contamination.

Read More >> What is Gluten-Free At Arby’s?

While it would be nice if more Zaxby’s core offerings were available as a gluten-free alternative it’s just not something in the cards for this incredible chicken place, not as of late 2022, anyway.

It’s impossible to guess what the future may hold for Zaxby’s, though.

They might surprise everybody and start rolling out new GF options in the near future.

Wouldn’t that be something!