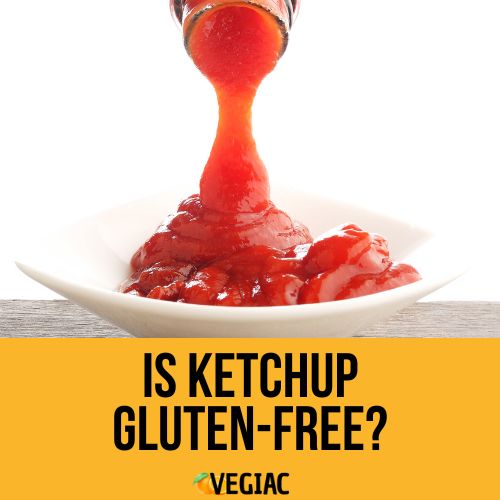 Ketchup is a naturally gluten-free food, not containing any rye, wheat, or barley.

However, some brands may include some ingredients that contain gluten in their ketchup, such as vinegar derived from wheat or glutenous binding agents. There is also the risk of contamination with other foods that contain gluten, as is typically the case with facilities that process different foods.

Read on to learn more about ketchup, its ingredients, and how those with Celiac disease can make sure their ketchup is free of gluten.

What Ingredients Are in Ketchup?

Ketchup originated in China, where it was a simple mixture of tomatoes, pickled fish, and spices. Today, ketchup is a relatively simple food that includes the following ingredients:

While none of these ingredients contain gluten, vinegar can be derived from barley (also known as malt vinegar), which is why people with Celiac disease may have an allergic reaction to some brands of ketchup.

Vinegar: Is it Gluten-Free?

Most vinegar is gluten-free, which is important as it is one of the main ingredients in ketchup. Vinegars such as red wine vinegar, apple cider vinegar, cane vinegar, and balsamic vinegar are all gluten-free. Malt vinegar, however, isn’t distilled and is derived from barley.

Ketchup is a naturally gluten-free food, at least its basic recipe. Tomatoes, vinegar, sugar, salt, and the spices usually used in ketchup are gluten-free.

When a ketchup is labeled to have gluten in it, the vinegar is usually the culprit. While most vinegar is distilled from non-glutenous ingredients such as grapes, malt vinegar isn’t distilled and is derived from barley – which is one of the three main grains that aggravate Celiac disease.

So, it goes without saying that ketchup made with malt vinegar is NOT gluten-free and should be avoided by those with sensitivity to gluten.

Some ketchup recipes, especially homemade ones, are difficult to verify as being gluten-free not only because of the possible additions of ingredients containing gluten, but also because of the risk of cross-contamination with glutenous foods.

How To Make Sure Your Ketchup Is Gluten-Free

As is the case with most common food allergens, the label is your best bet for understanding whether your ketchup is certified gluten-free.

While most conventional ketchup brands and recipes are gluten-free, there is always the risk of cross-contamination – especially if the brand of ketchup processes its products on equipment that also comes in contact with foods containing gluten.

Most popular brands of ketchup are gluten-free, but the following are labeled and certified to contain no gluten nor use equipment that shares equipment with glutenous foods.

Ketchups To Avoid if You Have Celiac Disease

Homemade ketchup recipes and ketchup that doesn’t contain a certified gluten-free label are best avoided by those who suffer from Celiac disease, as there is no way to verify whether the ingredients contain gluten or have come from a facility that shares equipment with foods that contain gluten.

Some brands of ketchup that aren’t necessarily safe for those sensitive to gluten are:

While ketchup may be gluten-free, it is high in sugar and sodium, so shouldn’t be consumed in high quantities or by anyone with diabetes, high blood pressure, or heart disease.

Tomatoes, which are ketchup’s main ingredient, are high in antioxidants such as lycopene. Other than this, however, ketchup has little to no nutritional value. The tomatoes in ketchup don’t contain the vitamins and minerals they do in other forms.

Like most foods, ketchup should be enjoyed in moderation. The following are negative aspects of consuming too much ketchup.

While most ketchup brands are naturally gluten-free, you should always search for an allergen label before purchasing.

If there’s no allergen label present, even if the ingredients aren’t glutenous, the facility that processes the ketchup likely shares equipment with foods that contain gluten.