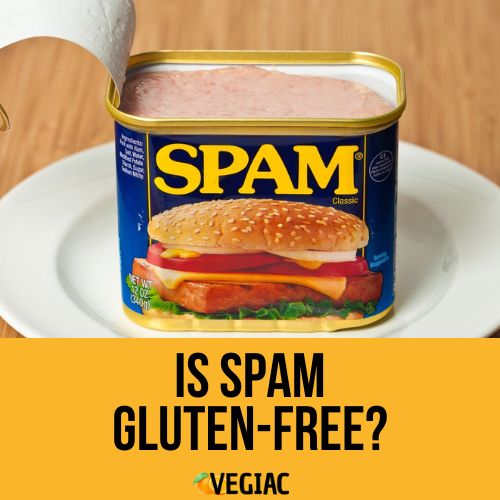 The ingredients list on a can of Spam does not mention gluten, and Hormel Foods has confirmed that Spam does not contain any gluten-containing ingredients. However, Spam is manufactured in a facility that also processes wheat products, so it may be contaminated with gluten.

Even trace levels of gluten can trigger symptoms like bloating, gas, and exhaustion in those with celiac disease or non-celiac gluten sensitivity. You should talk to your doctor or a Registered Dietitian if you have doubts about the healthfulness of Spam.

Where Does Spam Originate, and What Is It?

In 1937, Hormel Foods Corporation introduced Spam to the world. The leftover pork shoulder from carving hams inspired the creation of this product. The name “Spam” was created by Hormel Foods, who took the phrases “spiced” and “ham” and merged them into one.

During World War II, Spam became a staple food for troops stationed overseas because it didn’t require refrigeration and had a long shelf life. In fact, it was so popular with soldiers that it earned the nickname “ham that didn’t pass its physical.” After the war ended, Spam continued to be popular in Hawaii and other parts of the Pacific due to its affordability and convenience.

In recent years, Spam has become something of a cultural icon, thanks in part to its starring role in Monty Python’s famous “Spam” sketch. In the sketch, two customers try to order breakfast at a cafe, but are bombarded with offers for Spam dishes instead. Today, there’s even a museum dedicated to Spam in Austin, Minnesota—the home of Hormel Foods Corporation.

Read More >> Are Hash Browns Gluten-Free? (What You Need to Know)

What Are the Ingredients in Spam and Why Is Gluten Not One of Them?

Spam is made from pork shoulder, ham, salt, water, potato starch, and sugar. That’s it! No gluten, no artificial preservatives or flavors. So why does it have such a bad reputation?

Part of the reason may be that spam was introduced to the United States during World War II, when rationing was commonplace and people were looking for ways to stretch their food budget. Spam quickly became a popular way to add protein to meals without breaking the bank. However, since it was mass-produced and canned, many people assumed that it must be unhealthy.

So if there’s no gluten in spam, does that mean it’s safe for people with celiac disease or non-celiac gluten sensitivity? Unfortunately, not necessarily. While the ingredients in spam are naturally gluten-free, the manufacturing process may not be. For example, if spam is produced in a facility that also processes wheat products, there is a risk of cross-contamination.

Additionally, some brands of spam add wheat flour as an ingredient. This is done to improve the texture or flavor of the final product. If you’re concerned about consuming gluten, be sure to check the label carefully before purchasing spam or any other processed meat product.

What Are the Benefits of Eating Spam?

A serving of spam only has 80 calories, which makes it a great option if you’re watching your weight. Compare that to a serving of bacon, which has about 150 calories, and it’s easy to see why spam is the better choice.

Have you ever had something go bad in your fridge before you had a chance to eat it? With spam, that’s not a concern. Spam doesn’t need to be refrigerated, so you can store it in your pantry and enjoy it anytime you want without having to worry about it going bad.

There are endless ways to prepare spam. You can fry it, bake it, grill it, or even put it in soup. No matter how you cook it, spam is sure to give your meal a boost of flavor.

Are There Any Risks Associated With Eating Spam?

The high salt level of spam is the biggest health concern connected with its consumption. More than half of an adult’s daily sodium intake recommendation may be found in just one serving of spam, which clocks in at 790 milligrams. Hypertension, or high blood pressure, can develop due to the food’s high sodium level.

Hypertension is a major risk factor for heart disease, stroke, and kidney disease. If you have hypertension, you should limit your intake of spam or avoid it altogether.

Another risk associated with eating spam is the possibility of food poisoning. While the risk is low, canned meats like spam can be contaminated with bacteria like Listeria monocytogenes. This bacteria can cause severe illness, particularly in pregnant women, young children, the elderly, and people with weakened immune systems.

Symptoms of Listeria infection include fever, muscle aches, nausea, and diarrhea. If you experience any of these symptoms after eating spam, you should see a doctor immediately.