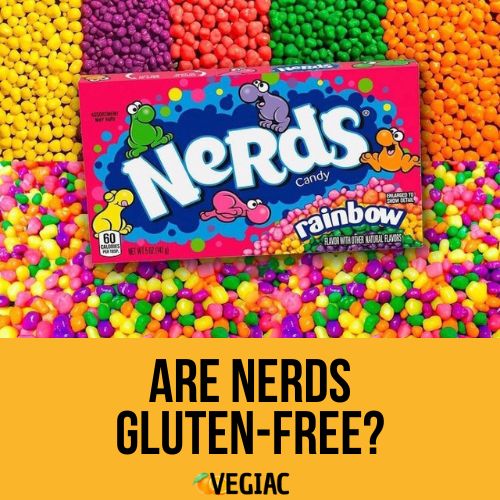 Nerds are a candy made by Ferrera that do not list any gluten products in the ingredients. However, the label does indicate that Nerds may be manufactured in the same facility as other products containing gluten.

In this article, we will review whether or not Nerds actually contain gluten as well as what ingredients are in Nerds. Additionally, we will cover whether or not any of the many Nerds varieties are considered gluten-free and some options for gluten-free alternatives to Nerds.

Do Nerds Contain Any Gluten?

According to the list of ingredients that is mandatory by the Food and Drug Administration to be printed on every food product, Nerds do not have any gluten containing materials. Although this would technically make them gluten-free, there may be traces of gluten in the candies too small to require legally stating so on the packaging.

Nerds are made in the same facility as other Ferrera candies that do contain gluten, specifically corn gluten. While there is a minute amount of corn syrup in Nerds, there may be some corn gluten in this product due to accidental cross contamination with other products made in the facility that does contain gluten.

In order to make sure that Ferrera’s customers are safe, they do not have a gluten-free label on the Nerds packaging because of the potential for gluten contamination. If you put Nerds under a gluten test, the amount that would show up – if any – would hypothetically be very minimal. However, if you are hypersensitive to gluten, it doesn’t take much to set off a reaction.

Even though Nerds does not explicitly list any gluten containing ingredients, they also do not carry a certified gluten-free label, so snack with caution.

What Are Nerds Made of?

Like most candies, Nerds are basically just sugar. With cane sugar, dextrose, malic acid, and corn syrup as the main ingredients, there is not much room for nutrition. The corn syrup may contain corn gluten which could be an issue for those adhering to a gluten-free diet.

Other ingredients in Nerds include carnauba wax and various artificial dyes which accounts for all the bright colors the candies are available in. While not the most nutritious of foods, Nerds are also very low on the gluten scale threat, with only a chance of cross contamination for gluten.

Hence, gluten is not listed as one of the ingredients on the packaging; however, it may still be present so use caution when consuming this product. Likewise, egg is not explicitly listed as an ingredient, but other products manufactured in the facility do contain egg so cross contamination is always possible.

When in doubt, heed the warnings of the other products that Nerds may come into contact with so that if you have an allergy or health issue with any of these, you will know to avoid eating Nerds.

Are Any of the Nerds Varieties Gluten-Free?

Ferrera manufactures a suite of different Nerds varieties, none of which are labeled as gluten-free. However, none of them list any ingredients that indicate the presence of gluten. The issue comes in with the other products they are manufactured with.

Ferrera makes other candies that do have gluten in the same facility as Nerd varieties. Because of this, there is always a chance that the Nerds you buy may be accidentally contaminated with gluten. The only way to know for sure is to have your package of candy tested before you consume it.

If your diet is that strict, however, it may be a good idea to avoid all Nerds altogether. Although, if you can handle the possibility of cross contamination, check out the following Nerd varieties that do not have gluten containing ingredients listed:

What Are Some Gluten-Free Alternatives to Nerds?

If you are bummed out that you can’t eat Nerds because you can’t afford to run the risk of cross contamination, don’t worry there are alternative candies that taste just as good. Nerds has that delightfully sugary, fruity flavor with a bit of crunch. If you want a similar candy experience, try Smarties.

Smarties are guaranteed gluten-free and they even have a certified label right on the package, so you can feel confident about choosing this candy without any consequences. Smarties are available in flavors such as orange, pineapple, strawberry, and raspberry – some of which are flavors that Nerds come in as well.

If you are more of a fan of the Big Chewy Nerds but want to avoid the possibility of gluten, try Boston Fruit Slices. With a variety of bright colors and flavors just like Nerds, Boston Fruit Slices are sugary gummies that will satisfy your craving for that chewy candy. They also boast being gluten-free right on the package, so you don’t have to worry about getting sick.

Nerds are a delightful sugary confection made by Ferrara that does not list any gluten containing ingredients. However, they also do not sport a gluten-free label, which means they have not been certified as gluten-free. There is a note on the label that indicates that Nerds are made in the same facility as other products containing gluten, so there is a chance of cross contamination.

Although there are many varieties of Nerds, all of them share the same possibility of gluten contamination even without gluten ingredients. For those who follow a strict gluten-free diet, certified gluten-free candies like Smarties or Boston Fruit Slices might be a better option.