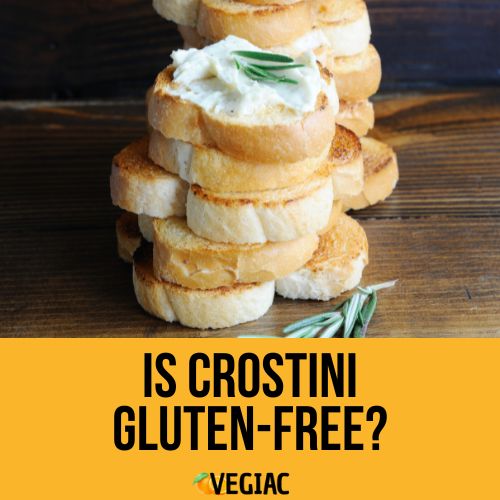 “Small toasts” is what the word “crostini” means in Italian. Either they can be properly toasted (by placing them on a baking sheet and placing it in the oven) or they may be grilled. They are great in any configuration: on their own, with lox or tapenade put on them, spread with tapenade, or, our personal favorite, combined with bruschetta.

Crostinis are an Italian appetizer that have been around for generations. They are produced by topping thin slices of bread that have been toasted or grilled with a variety of toppings and then serving them.

Alternately, the toppings could be presented in a more plain fashion with a coating of olive oil, herbs, or a sauce. The toppings could consist of a broad variety of cheeses, meats, veggies, and sauces.

These delicious bite-sized snacks can also be prepared without the use of gluten in any way! Continue reading to find out how to prepare gluten-free crostinis, tasty ways to eat them, and how to store them so you can enjoy them at a later time.

Regardless of whether you adhere to a gluten-free diet or not, there is a good probability that you have some stale baguette bread lying around at some point in your home. Consider slicing the bread into very thin pieces as an alternative to throwing it away or providing the crumbs to the birds as a source of food.

Next, you can either place them in the freezer or use them right away to make gluten-free crostini that are on an entirely different level of deliciousness by topping them with one of these naturally gluten-free toppings:

The tuna tapenade is the only topping that is not acceptable for vegetarians, while the rest are. Simply remove the tuna and increase the amount of olives to make this topping vegan.

Before toasting and seasoning the baguette slices, prepare one, two, three, or all four of the toppings. Simply adding a garlic clove on top of each baguette slice and spraying olive oil on both sides before placing them on a griddle pan or in a panini machine helps you to toast the baguette slices quickly.

Crostini can be served hot or cold, depending on the diner’s tastes. For a sharper and more delicious foundation, dress each crostini right before serving.

What Do You Need To Make Gluten-Free Crostini?

In order to make crostini that are free of gluten, you will need to get your hands on a baguette that does not contain gluten.

In addition to the gluten-free baguette, you will also need some olive oil in order to finish preparing this meal. We strongly recommend that you make the investment in a brand of olive oil that is of a high quality and has a flavor that can be described as buttery and smooth.

The flavor of the olive oil will have a major impact, both positively and negatively, on the taste of the crostini.

How To Properly Store Crostini That Is Free of Gluten?

If you plan on waiting more than two days before eating the crostini, you should probably store them in the refrigerator. This is the recommendation.

It is recommended that you keep a piece of crumpled paper towel in the bag with your crostini to prevent it from getting soggy. Because of this, any further water that may have been on the crostini will be sucked away.

If you find that the crostini have lost some of their crispiness, you can always place them back in the oven for a few additional minutes at a temperature ranging from 400 to 425 degrees Fahrenheit to help them regain their crunch.