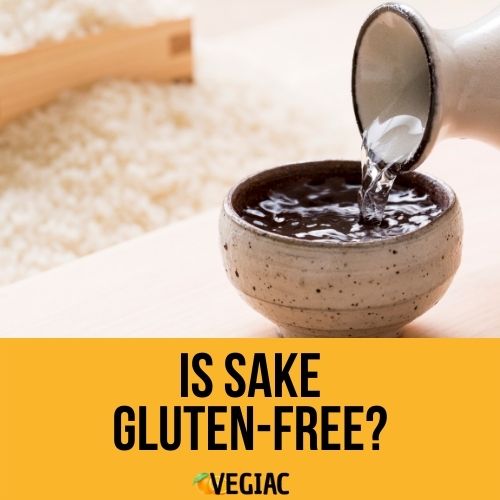 Sake, also known as Japanese rice wine, has a unique taste that many enjoy. Like many other alcoholic beverages, it’s only natural to wonder whether sake is safe for a diet that avoids gluten.

Sake made traditionally using only rice koji is gluten-free. Sake manufacturers that use barley koji may contain trace amounts of barley, and may not be safe for a gluten-free diet.

While the answer to the question “is sake gluten-free” is usually straightforward, there is enough gray area to raise an eyebrow. Keep reading to learn how you can determine which sake brands are safe for anyone with celiac disease.

The gluten-free status of sake depends on how it is made. In most cases, this process does not contaminate the drink and you should be clear to consume the traditional Japanese beverage.

The difference depends on how the manufacturer chooses to ferment the rice. This decision also affects how the sake is labeled, making it much easier to distinguish between gluten-free and potentially contaminated sake.

In most cases, the ingredients for sake include:

Understanding that rice and water are naturally gluten-free, we can take a closer look at the koji to determine the sake’s gluten-free credibility.

Usually, this is the fungus Aspergillus oryzae, and it can grow on a few different substances. For gluten-free sake, you need koji that grows on rice. This ensures that there is no opportunity for cross-contamination, and you can safely consume the beverage without worry.

It gets tricky when you come across sake that uses koji grown on barley, as barley is not gluten-free.

Unfortunately, barley proves to be especially great for growing koji. The barley itself is not added to the rice during the fermentation process, but it is possible for some small amounts of barley to stick to the mold after the growing stage.

This also doesn’t guarantee that the sake is contaminated. In many cases, the trace amounts are not significant enough to cause a reaction. They usually fall below the U.S. and international law of gluten-free (fewer than 20 parts per millIon), even when the koji grows on straight barley.

This is a bigger issue for those that still react to these trace amounts. For example, if you’re sensitive to mushrooms that grow on gluten-containing grains, this has a greater chance of being an issue.

Other brands may use a small amount of grain-based distilled alcohol at the tail end of the manufacturing process. This is still unlikely to cause issues unless you already react to alcoholic beverages derived from gluten grains.

In certain instructions for growing sake at home, the instructions call for a small amount of toasted wheat flour. This goes into the mixture that you add to the rice for fermentation, and it undoubtedly creates an issue for anyone on a gluten-free diet.

If you’re brewing at home you need to find a specific gluten-free recipe. If you are consuming sake that someone else brewed, make sure they do not use any suspect methods during the manufacturing process.

There are a few ways to go about determining the gluten-free status of sake.

If it’s a home brew, ask about the manufacturing process and ensure that there are no gluten-containing ingredients used. If there is any room for speculation, it is better to err on the side of caution.

For bigger operations, you can determine what type of sake it is or look at the ingredients list.

Sake needs to meet certain standards before the manufacturer can consider it “premium”, and there are plenty of identifiers of premium sake.

Some non-premium brands use a purer manufacturing process and may have these markers, you should treat anything else with caution.

In many cases, someone literally labeled premium sake as “premium”. This uses the traditional methods for making sake that result in a gluten-free diet. Sake makers must meet the requirement of only using rice koji to ‌label their sake as such, so there is no worry about trace elements of barley here.

If the sake does not have a “premium” label, look for other identifiers that indicate this status. Words to look for include:

Because they stick to the traditional manufacturing process, you don’t need to worry about gluten in your sake.

The most obvious sign that sake may contain gluten is a disclaimer that many brands put on the label. This happens when there is a significant chance of contaminated sake, even if it’s only trace amounts.

Manufacturers also warn of gluten contact if they use wine barrels to age the sake. While traditional sake barrels do not contain gluten adhesives, this is a worry with other materials.

Sake brands you can expect to be gluten-free include:

These brands are either committed to producing premium-grade sake, or they disclose on their labels that their beverages are gluten-free.

Is it Safe to Drink Unidentified Sake on a Gluten-Free Diet?

It is not safe to drink unidentified sake on a gluten-free diet, particularly if you are sensitive to trace amounts of gluten or react to grain-based distilled alcohol. While many sake brands disclose the possibility of cross contamination, there is no legal requirement in these instances.

It should be easy enough to find a manufacturer that does not use barley or open the door for potential contact.

It should be easy to determine whether sake is gluten-free by looking at the label. Manufacturers that use traditional methods create a pure product that won’t come into contact with gluten-containing materials. If you’re ever in doubt, you can contact the manufacturer for a clearer answer. If it comes down to it, you should always err on the side of caution. Labels that don’t disclose potential contact are not safe, and there is no guarantee that there are not trace amounts in the sake.