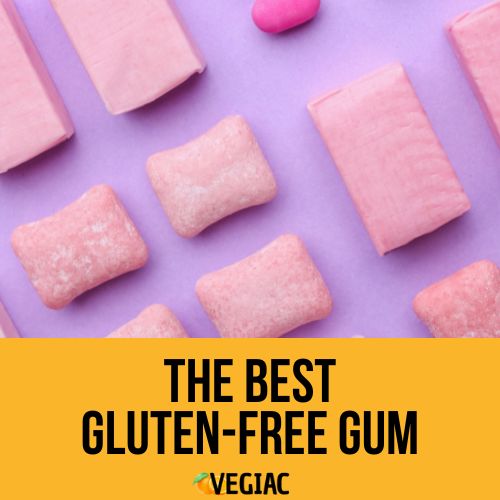 Going gluten-free is a challenge for many people, and whether you’re following a diet or trying to avoid allergic reactions, finding gluten-free foods can be challenging. Here are some of the best gluten-free gums available for you.

All of these gums are safe to chew if you’re trying to avoid ingesting gluten and don’t pose any health risk. The rest of this article will discuss what gums are and are not safe, as well as why you’d want to avoid gum with gluten in it.

Why Do Gums Have Gluten?

Gluten is a protein found in wheats that is used in some gums to maintain its shape and provides texture. For most people, it’s not bad, but excess gluten can lead to health concerns. Additionally, some people are gluten-insensitive or gluten intolerant, causing potentially serious reactions in the body. As such, there are some gums that you want to avoid if you react to gluten.

What Gums To Avoid

You’ll want to steer clear of the following gums since they all contain gluten:

All of these have gluten and pose a risk for people with allergies. Obviously, with gum, you’re not swallowing it, but there’s still a risk of ingesting gluten by chewing these gums. As such, it’s better just to avoid these options to play it safe.

What Gums Are Gluten-Free?

Thankfully, there’s lots of gum brands out there that are gluten-free and perfect for giving you that hit of freshness or something to occupy your mind between tasks. These 11 gum brands have transparently listed ingredients and are safe to consume if you’re on a gluten-free diet.

Extra bubble gum comes in several flavors and offers a great hit of flavor without the risk of ingesting gluten. Whether it’s spearmint, watermelon, or fruity blast, Extra is gluten-free and doesn’t contain any wheat or gluten-containing ingredients. All flavors of Extra are safe, including the sugarfree gum, spearmint, polar ice, smooth mint, and berry burst.

Also manufactured by Wrigley, Eclipse is gluten-free. Any of their flavors, including spearmint, polar ice, peppermint, and winterfrost are gluten-free and don’t pose any risk. It does, however, contain the preservative BHT and is not suited for phenylketonurics since it contains phenylalanine.

Freedent is a gluten-free gum that comes in several flavors, with the peppermint flavor being extremely popular. According to Wrigley and other independent sources, Freedent is free of gluten ingredients, both in processing and in the ingredients list. People also report that it’s one of the few gums that doesn’t stick to dentures, which is an added benefit.

Hubba Bubba is gluten-free, except for the Hubba Bubba Gummi Tape. This is the only product in Hubba Bubba’s line that contains wheat flour and fiber, both of which are made from gluten. Gum comes in four flavors: Hawaiian punch, grape, strawberry watermelon, and apple. All of these options are gluten-free and suitable for people with gluten sensitivities.

There are lots of great flavors of Juicy Fruit, and much like other Wrigley products, they are all gluten-free. Everything from the starburst to their fruit chews and bubble gum are safe to consume.

Keep in mind that Juicy Fruit products have BHT being used as a preservative. In addition, starbursts are not vegan since they contain gelatin. Other than these concerns, Juicy Fruit is a safe (and delicious) option for people with gluten sensitivities.

A sugar-free gum produced by Wrigley, all of 5 Gum’s flavors are gluten-free. Their flavors include rain, cobalt, ascent, react, prism, RPM, and tempo, all of which are safe to consume.

Big Red is a gluten-free gum that gives the perfect kick for lovers of all things spicy. This cinnamon flavored gum has a fiery tasty that is entirely gluten-free. Keep in mind that this gum contains BHT as well as several artificial colors that may have other health implications.

Trident gum, in all flavors, is gluten-free and safe to chew. Keep in mind that they are not officially gluten-free certified, but their ingredients show no traces of gluten. Owned by Cadbury’s under the parent company Hersheys, Trident is both gluten-free and sugar-free, coming in a range of flavors.

Tridents offers lots of different styles of gum, such as the Splash gum that has a burst of flavor in the middle. The company also claims that their gum has positive properties that help keep cavities at bay.

Orbit gum is gluten-free, including its wide array of flavors. From peppermint to tropical remix, you can enjoy flavorful gum without the risk of triggering gluten sensitivities. Orbit Wintermint sugar-free chewing gum is approved by the American Dental Association and offers freshness of breath like no other.

Wrigley’s Spearmint gum is gluten-free and ideal for people who enjoy spearmint flavor without worrying about the risk of triggering gluten sensitivities. The spearmint flavor offers a great deal of freshness and is a great brand option to enjoy gum without any risk.

Wrigley’s Winterfresh gum is safe for people with gluten sensitivities and offers a long-lasting fresh taste in the mouth to enjoy.

A Word of Caution

When it comes to Wrigley’s products, none of their gums contain gluten. Neither does their packaging material, nor their processing equipment. Be aware that if your sensitivity extends to other gluten types, several brands of gum contain corn gluten, albeit in very slight amounts. Consult with your doctor before chewing gums or other foods containing corn gluten if that’s a concern for you.

Most gums are naturally gluten-free, but there’s still a few that you need to be on the lookout for. Thankfully, in the wide world of gums, there are plenty of safe (and tasty) options for you to chew on and freshen up your breath without worrying.