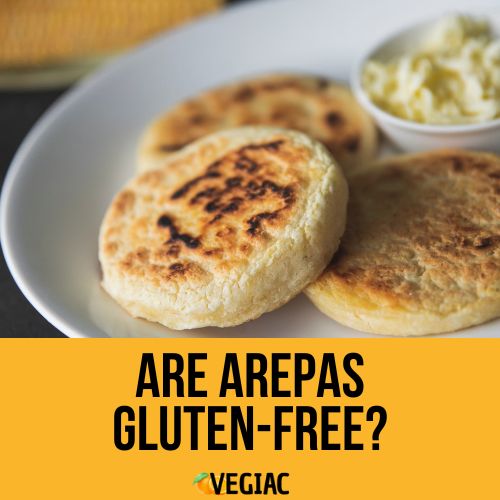 Arepas are a traditional dough made out of ground maize (corn) eaten in northern regions of South America, especially Colombia, Venezuela, and Bolivia, but are they gluten-free?

Arepas are made of masarepa which is generally a corn based dough, so therefore arepas are generally gluten-free.

However, there are other factors that could change the gluten contents of an arepa like manufacturing practices and packaging. What are these delicious delicacies really made out of, and how do you make them? Keep reading this article to find out.

The corn-based dough that gives arepas that delicious and unique flavor is thanks to masarepa. Masarepa is a pre-cooked ground corn flour, popular in regions like Venezuela and Colombia.

To make masarepa takes a bit of a process, and it takes a lot of physical work. You have to soak the dried corn and then manually pound the grains in order to remove the seed germ and the outer lining. Whatever is left of the corn is then cooked and ground up- this makes the arepas!

The good news is that the process of masarepa has sped up with the times, after all, no one really has time to grind the dried corn these days.

Once you have the pre-cooked corn flour, all you need to do is add a few more ingredients and the arepa mix is ready to hit the grill.

The great thing about arepas is that they can be eaten as a side dish, or as a main dish. They’re often eaten plain, topped or filled with meats or cheese, and vegetables too.

How Do You Make Arepas?

Once you have the masarepa, the arepas are prepared on a griddle and fried to golden brown perfection. To make these delicious round corn cakes doesn’t take too much effort once you get the hang of it.

The general ingredients you’ll need are:

Here’s a quick recipe to assist you, and also a helpful video to show you in case you want to learn from an expert.

But that’s just the tip of the iceberg. Did you know there are about 75 distinct forms of arepas that exist. There are many types of flavors and styles this dish comes in.

The variations depend on the region of Latin America you come from, so in some parts of Colombia they may come thinner and wider, whereas in Venezuela it will be thicker.

There are even chocolate arepas to satisfy anyone who has a major sweet tooth. Want more sweet options? There’s also arepas de Planato Maduro, which are arepas made with ripe plantains and a little sugar.

Do All Arepas Come Gluten-Free?

Because of their corn-based nature, arepas are gluten-free.

In its natural form, corn is gluten-free, but it’s always a good practice to check ingredients listed on the packaging of corn flour to make sure that the corn flour wasn’t processed with gluten byproducts, especially if you’re severely allergic or suffer with Celiac disease.

Read More >> Are Hash Browns Gluten-Free? (What You Need to Know)

If arepas are made in their purest form, then perhaps, they’d be a hundred percent gluten-free, but what about at a restaurant?

The short answer is that you’ll have to ask the kitchen staff/chef personally if the arepas being prepared for you are gluten-free.

There are plenty of ways that arepas might get prepared on surfaces that also were in contact with gluten whether it be the same cooking oil, utensils, or the surface they were rolled on.

Where Can I Get the Best Arepas?

With all of this talk of delicious Latin American food, I’m sure you’re wondering if there’s anywhere you can find the best arepas, especially if you’re not able to make them from scratch.

To find the best arepas, one might have to book a flight to Venezuela or Colombia as soon as possible- after all, that’s where arepas are most common, geographically speaking.

Depending on where you live, there are Latin neighborhoods in a lot of diverse cities, and you might be lucky enough to be living close to one. You can easily search Latin restaurants wherever you live and cross your fingers that they sell arepas!

If you can’t find one, then you might have to try your hand in the kitchen and attempt to make arepas from scratch! The good thing is there are plenty of delicious recipes posted with video instruction as well.

If you can’t get enough of the rich corn flour taste of arepas, then you’re in luck. Regionally, South American cuisine features many corn-based delicacies.

This process makes the corn more digestible, and is commonly used to make corn tortillas. Like arepas, pupusas are filled with cheese, beans or ground pork.

Here’s a video on how to make pupusas.

Gorditas are a Mexican dish that often look like arepas, but they’re made from masa harina, like pupusas. Unlike arepas which are flat, gorditas are fried until they puff, almost like a pita pocket. They are also stuffed with delicious fillings like beans and cheese.

For a delicious gordita stuffed with red chile ground beef, check out the video here.

Now that I’ve opened your appetite to the delicious world of arepas, the question that you might be asking is- how can I get some?

The great thing about these delicious and sweet corn cakes is that they’re delicious and available to people who suffer with Celiac disease or gluten sensitivities as well.