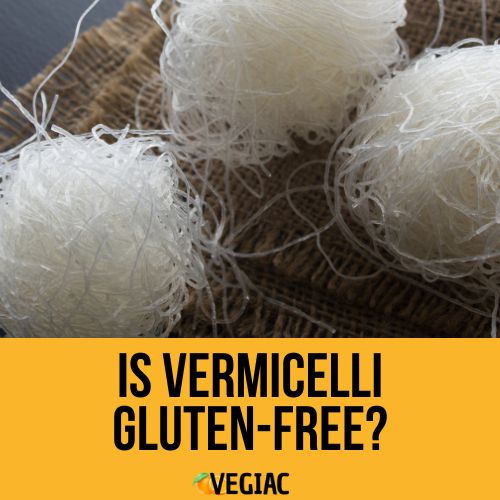 Vermicelli is a beloved type of fine, thin pasta, and features on plenty of popular Italian restaurant menus! However, if you’ve cut gluten out of your diet, you may be wondering: is vermicelli gluten-free?

Vermicelli in the United States is defined as a food that is not gluten-free because it commonly contains wheat flour. However, if vermicelli is made with buckwheat, as it is in the Asian style, or made with sweet potato starch in the case of Glass Noodles, it may be gluten-free.

If you’re disappointed and wondering what makes vermicelli a food that can’t be called gluten-free, don’t worry! In this article, we’ll not only cover how vermicelli contains gluten, where gluten comes from, and a few related frequently asked questions!

How To Determine Whether Or Not Vermicelli Is Gluten-Free

Vermicelli might be defined as a type of pasta in the United States, but actually, in some cultures, it is normal to use the word vermicelli to describe rice and cellophane noodles. So, if “vermicelli” can be the name of a few different recipes, how can you be sure of it’s gluten content?

Not only that, but what is gluten, and how can you tell whether or not it is in any kind of food, including vermicelli?

Below, we’ll cover what gluten is and where it comes from so that you can determine whether or not the ingredients in each type of vermicelli contain gluten.

Where Does Gluten Come From?

The protein gluten is a type of binding element that aids in the texture and durability of some foods like dough or oil. It is created as a protein in common types of grain, and included in many foods. Foods that include gluten are listed as follows:

Gluten is often used as a type of stabilizing agent and thickener, so it is found in many common foods. Though it is a healthy source of bacteria sustenance and protein, it can cause some harmful reactions in those with a gluten allergy or celiac disease.

Because gluten allergies can cause such a wide range of symptoms, especially in inflammation, gluten substitutes are important to find and understand.

Are There Gluten Ingredients In Vermicelli?

Now that we’ve established what gluten is and how to identify it in the ingredients of a food, the important question is: which vermicelli recipes contain gluten? Below is a list of different types of vermicelli and their ingredients:

So, there you have it! If you decide to partake in a dish at a restaurant in the United States, check to be sure that it is not made with wheat, therefore containing gluten, before eating. However, if you’re enjoying an Asian style of vermicelli or Glass Noodles, it may be safe to say that the dish is gluten-free! Simply check the ingredients to be certain.

Here are some frequently asked questions related to vermicelli and whether or not it is gluten-free!

Vietnamese vermicelli noodles come in two different styles: one, known as “Bun” noodles, is made with wheat rice and water and is not gluten-free while the other, known as “Mein” is made from mung beans and is therefore gluten-free.

Celiacs can eat vermicelli as long as they make sure that the recipe used to make the vermicelli noodles does not contain wheat. In the United States, it is common for vermicelli to contain gluten and therefore pose a threat to those with celiac disease. However, Glass Noodles and the Vietnamese Mein-style vermicelli are not made with wheat and are gluten-free.

Is Vermicelli Wheat Or Rice?

Vermicelli can be both wheat or rice depending on the recipe used to make it. Though U.S. vermicelli is typically a noodle that is made with wheat, some vermicelli, like those produced in Asia, are made with rice flour and are gluten-free.

What Types Of Noodles Are Gluten-Free?

Any kind of noodle that is not made with wheat or gluten-producing grains is generally considered gluten-free. Some of the most popular options include Sheritaki noodles, chickpea pasta, soba noodles, brown rice pasta, and quinoa pasta. Multigrain pasta that does not include wheat, barley, or rye can also be gluten-free.

Which Vietnamese Dishes Are Gluten-Free?

Some Vietnamese dishes are made without any of the foods that produce the gluten protein or are processed with grains. These include bun bo, rice cakes, pho, rice, fish, and mein, which is a type of vermicelli! Just be sure that there is no soy sauce included in these dishes, because soy sauce does contain gluten.

Is Vermicelli Easy To Digest?

Vermicelli is typically made from foods that are easy on the digestive tract, whether that is sweet potato starch, rice, or even wheat. However, while this may make vermicelli easy to digest for those without a gluten allergy, those who are sensitive to gluten will find vermicelli that is made with wheat very hard to digest and should avoid it.

In conclusion, vermicelli is a type of pasta that can be made in many different ways, and is typically not gluten-free if purchased in the United States. However, some types of vermicelli, like Glass Noodles or Vietnamese Mein, are made without wheat and are therefore gluten-free! To be sure of the gluten in your vermicelli, simply check the ingredients it was made with.