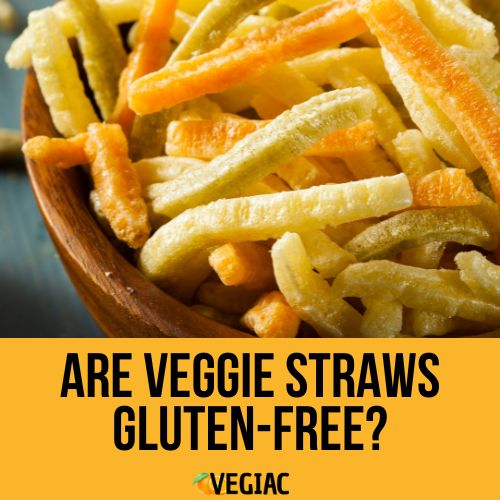 If you have been diagnosed with celiac disease or are simply looking to remove gluten from your snack-food diet, veggie straws may sound like a yummy option! However, you’ll need to find the answer to the question: are veggie straws gluten-free?

So veggie straws are a fine gluten-free option when hunting for a snack! In this article, we’ll cover why veggie straws count as gluten-free, as well as some frequently asked questions related to the topic. Read on to discover all you need to know about gluten’s relationship with veggie straws!

Do Veggie Straws Count As Gluten-Free?

Veggie straws do count as gluten-free, but to understand why, it is important to identify what gluten is and where it comes from, as well as what ingredients veggie straws are made with!

Gluten is actually a type of protein which is found in some grains. The main grains containing gluten include:

Gluten turns out to be a good thing for the texture of most dishes which use these grains. For example, the protein of gluten acts as a kind of glue keeping flour in an easily-stretched consistency. It also can be a great source of protein for those who decide to adopt a vegan diet.

However, some human’s bodies react poorly to the protein. The most severe type of negative reaction to gluten can be found in celiac disease.

Celiac disease is a condition in which the body’s autoimmune system identifies gluten as toxic and activates many uncomfortable symptoms to try and purge gluten whenever it is eaten. Some of these symptoms include intestinal damage and inflammation, and sometimes nerve disorders.

In the case of a gluten allergy or celiac disease, deciding to stop eating gluten can end these unfortunate symptoms. However, since gluten is used in so many modern products, it can be easier said than done. Being sure that snacks like veggie straws do not contain gluten is a reasonable pursuit!

What Ingredients Do Veggie Straws Contain?

Here are the ingredients of most veggie straws, including Garden Veggie Straws and the Good ; Gather Sea Salt brand of Veggie Straws:

These ingredients are all gluten-free, but some of them act as substitutes for products that would usually contain gluten in other snack foods. For example, while wheat is usually found in flour, making the recipe thicker but containing gluten, Corn Starch can accomplish the same goal without producing the gluten protein.

This makes veggie straws completely free of that pesky protein, and therefore an alternative that won’t result in inflammation or the other side-effects of a condition like celiac disease.

Here are some frequently asked questions related to whether or not veggie straws are gluten-free!

Are Veggie Straws Gluten And Dairy-Free?

Veggie straws are made with corn starch and sometimes potato flour in place of wheat flour, making them gluten-free. Regular veggie straws are also made with no ingredients containing dairy. However, if you choose to snack on a veggie straw that boasts a Ranch flavor or Sour Cream, check the ingredients on the back to be sure there are no dairy products used.

Celiac disease causes the small intestine to respond negatively to any snack containing gluten. Because gluten is produced by wheat and other types of grain, which are not included in the list of ingredients used to make most veggie straws, veggie straws are considered celiac safe.

Do Veggie Chips Have Gluten?

Veggie chips are gluten-free because they are made of some of the same ingredients as veggie straws, though some substitute sweet potatoes and turnips instead of corn starch when looking to cut out gluten. Most importantly, many brands of veggie chips do not contain wheat or other gluten-producing grains.

It is always a good idea to double-check the labels on a bag of any snack food if you have an allergy to gluten before purchasing!

Sea salt veggie straws are considered gluten-free, being made up of the same ingredients that swap out gluten-producing grains which most veggie straw recipes use. These include potato starch, potato four, corn starch, and whey.

Are Veggie Straws Healthier Than Chips?

Veggie straws may be lower in calories per serving than many chips, but that is not the only factor to take into account when wondering if they are healthy. For example, whether you’re examining potato chips, veggie chips, tortilla chips, or veggie straws, all are likely to have about the same level of total sugar and fat content.

Therefore, veggie straws are not comparatively healthier than chips. However, if eating gluten causes you health problems like inflammation or unintentional weight loss, eating veggie straws rather than a product like Pringles chips is arguably healthier for you.

Cheddar veggie straws made by Sensible Portions Garden Veggie Straws are considered gluten-free. This is because instead of using wheat flour, which contains gluten, the Cheddar flavor of veggie straws comes with potato starch and corn starch.

However, it should be noted that the cheddar veggie straws are not dairy-free, containing sour cream, buttermilk solids, whey, and cream.

In conclusion, veggie straws do not contain wheat, which is the ingredient that causes any product to contain gluten. Therefore, veggie straws are considered gluten-free! Those with celiac disease or those looking to cut gluten out of their diet can find a safe and healthy alternative to chips in the gluten-free veggie straw snacks!