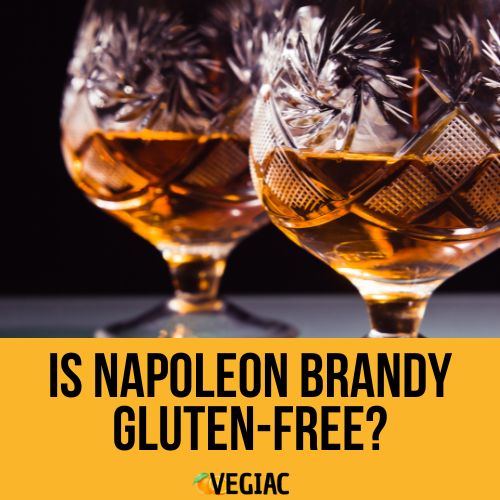 Thousands of people these days are being diagnosed with gluten sensitivities,  or gluten allergies, and many more are choosing a gluten-free lifestyle for personal or health reasons. Because of this, identifying what’s gluten-free has become important in every aspect of the food industry – including alcoholic beverages.

Brandy, including Napoleon Brandy, is usually made of distilled grapes or fruits. As such, it’s generally considered gluten-free.

For more about Napoleon Brandy and how it’s made, including how to be sure it’s gluten-free, keep reading.

Brandy, including napoleon brandy, is typically made from distilled grapes or other fermented fruits.

As long as it’s pure brandy, without any additives, it should be gluten-free. However, brandy with additive flavors may be somewhat more suspect.

What Is Napoleon Brandy?

Typically a ‘Napoleon’ brandy is made from blended and distilled fruit juices, which is sealed and aged in oak barrels.

It is also a label French brandy and cognac producers sometimes use to describe their best blends.

Why Is It Called Napoleon Brandy?

When Napoleon fled France, it was rumored he took crates of Courvoisier brandy, or cognac, with him to Saint Helene Island. His retainers began calling it ‘Napoleon’s cognac’.

Since then, Courvoisier has marketed a brandy that is known as Napoleon Cognac or Napoleon Fine Champagne with a blend of old port, prune and orange blossoms – all of which are still gluten-free. This is also called ‘Cognac of Napoleon’.

While there are rumored to be some bottles of the original Napoleon Era brandy around, in most cases this term is used to describe brandy of a certain age, color, or composition.

What Are Some Other Names or Types of Napoleon Brandy?

Courvoisier Fine Champagne Brandy is the ‘official’ Napoleon Brandy. However other brands have a ‘Napoleon’ brandy.

The term ‘Napoleon’ can also designate a brandy or cognac that’s been aged for 4 to 6 years.

Pure distilled brandy is also called eau-de-vie, so you may see something with the name Napoleon eau-de-vie.

For blends that earn the name Cognac – brandy with a specific type of grapes and subject to a specific distillation and aging process – it can be called a Napoleon Cognac.

Are There Any Reasons For Napoleon Brandy Not To Be Gluten-Free?

Under normal circumstances, there are no reasons for any type of Napoleon Brandy or Cognac to contain any form of gluten. However, there are certain things to be aware of.

Some oak barrels used for aging brandy are sealed with a paste that includes rye or wheat flour.

– There should be minimal cross-contamination, but it’s something to be careful about, especially if you have an extreme gluten allergy or sensitivity.

Additive flavors may also be contaminated with gluten, depending on what kind of flavors and additions are used.

– Fruit-flavored brandy, such as apple or plum brandy, is usually gluten-free.

– Brandy mixed with other liquers may not be gluten-free, as some other alcoholic beverages are made from grains.

– Brandy infused with non-fruit flavors may not be gluten-free, depending on what’s added.

Most brandy that comes with a ‘Napoleon’ label, whether it’s the official Courvoisier Napoleon Brandy, or a term used to describe a brandy of a specific age, is still made from distilled fruit juice.

The most common form of Napoleon Brandy is made of distilled and blended juice of white grapes, aged in oak barrels until it is matured.

If you’re getting a traditional form of Napoleon Brandy, then this is usually what you get, and it will be gluten-free.

Are There Brands That Are Known To Be Gluten-Free?

There are some brands with a reputation for brandies that are absolutely guaranteed to be gluten-free. The most well-known are:

All of these are known for brandy, including ‘Napoleon’ brandy, that is free of any and all gluten contamination.

If you’re looking for a good napoleon brandy, most of your options will be gluten-free, so you have a variety of brands and types you can choose from, and even a certain age range that’s available.

On the other hand, it’s always best to make sure, given the occasional practice of sealing the barrels with a flour-based paste. And if you’re looking at a flavored brandy of some type, Napoleon or not, you’ll definitely want to double check the additives to make sure everything that isn’t distilled fruit juice is still gluten-free.