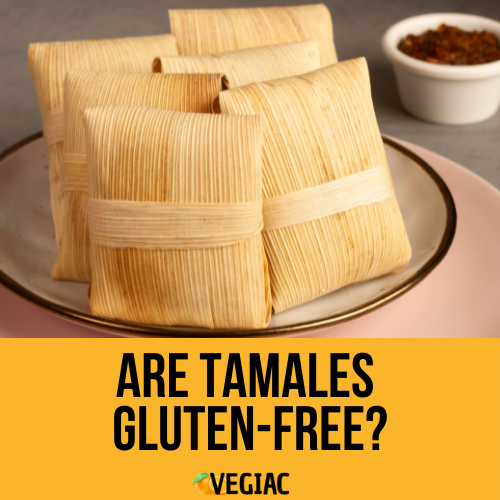 Tamales might be gluten-free. It depends, read on for more information.

Tamales are a Mexican dish. They contain meats, beans, or cheese inside of a corn-based dough. They are often wrapped and cooked in banana leaves or corn husks, which are removed before they are eaten. The tamales are made with two primary elements. The dough is called masa, and it is spread on the corn husk. You don’t eat the corn husk, as it is used to wrap the dough and filling. The second element is the filling, which can be meat, beans, and/or cheese.

The word tamale comes from the Aztecs, and it means steamed cornmeal dough. Tamales existed as far back as 8000 BC to 5000 BC. The Maya had a hieroglyph for the tamale, showing that it was an important part of pre-Hispanic civilizations. Different regions and cultures had their own variations on the tamales. The Maya filled them with roasted squash seeds, beans, turkey, deer, and fish. The Axtecs were known to use plants, turkey, frog, salamander, fruit, squash, and beans.

Today, they are still very popular in Mexico, Central, and South America. They are made with different fillings, and they are wrapped in corn husks or leaves from banana trees or avocado trees. In Mexico, they are eaten every day, but they are even more widely eaten during festivals.

Masa harina is ground corn flour, which is naturally gluten-free. If you eat tamales made with pure masa harina, they will be gluten-free. However, some tamales are made with corn flour that does contain gluten, and you usually find them as packaged food.

3. Tamales were made by the Atecs during the festival Atamalcualiztli to celebrate the birth of the corn god and show respect for the fire god.

4. National Tamale Day is celebrated on March 23 each year.

5. Tamales didn’t make their way to America until the beginning of the 20th century.

6. During “The Great Tamale Incident,” President Ford ate a tamale without removing the husk.

7. There are thousands of types of tamales available today, including tamales with rice, beans, potatoes, kale, jalapenos, chocolate, and more.

8. The Aztecs served tamales to the Spanish explorer, Hernan Cortes. In 1612, Captain John Smith said that they were made by Native Americans in Virginia.

9. Tamale is actually pronounced with a silent -e at the end.

There are many different types of tamales, but here are some of the most popular.

1. Tamales verdes: they are a mix of tomatillo and green chilies along with chicken or pork wrapped in corn or plantain.

4. Tamales de frijol: pureed beans and cheese. They are often found in Puebla and Morelos.

5. Tamales oaxaquenos: This is a generic term for tamales wrapped in plantain leaves with traditional fillings.

7. Tamales dulces: sweet tamales made with pink masa and raisins, and they may contain chocolate, pineapple, berries, and other sweet fillings.

8. Vaporcitos: Found in the Yucatan peninsula, they are made with pork and chicken and a spicy mix called recao. They are often topped with habanero sauce.

How to Make Tamales

It takes a little bit of time to make tamales, but anyone can do it. Take a look at the following recipe.

With 350 Varieties, Tamales Are as Diverse as They Are Delectable | texasmonthly.com