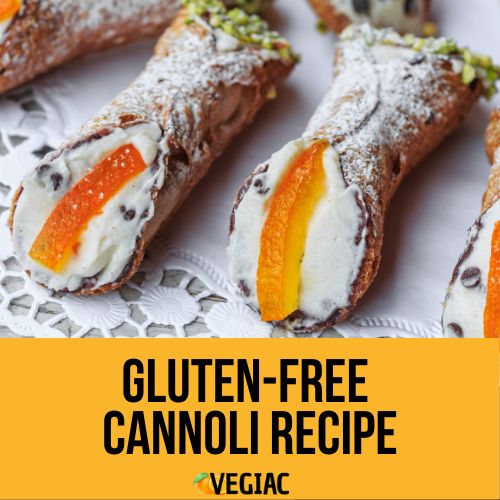 How To Make Gluten-Free Cannoli

Mix together the dry ingredients in a stand mixer, then add the wet ingredients. Let the dough sit for 30 minutes before dividing it in half and cutting circles from it. Wrap the circles around a cannoli tube, then seal the cannoli using egg whites.

Once the cannoli is formed, deep fry it in oil for 2 to 4 minutes. Remove and let them drain on a paper towel. Repeat these steps until all of the shells are fried.

Mix together the filling ingredients using a stand mixer until it becomes smooth and creamy. Fill a pastry bag with the filling and pipe it into the cannoli shells.

Dust with powdered sugar and decorate as desired before serving.

Cannoli is typically served as a dessert. They are topped with powdered sugar, but you can also dip the ends in chocolate or put chocolate chips or pistachios in the filling.

Filled cannoli shells typically last only a few days in the fridge. It is usually best to eat them as soon as possible, as changes in temperature can cause the shells to lose their color.

You can add chocolate chips, nuts, or bits of fruit to the filling if you want. You can also dip the end of the cannoli in chocolate for extra decoration.

Be sure to only fill the cannolis when you are ready to serve them. Otherwise, the shells can become soggy. You can store the cannoli cream and dough for the shells in the fridge or freezer ahead of time, or if you do not want to use all of it at once. Just let it thaw the night before if it was stored in the freezer.

If you do not have a pastry bag, you can use a ziploc bag to pipe the filling. You can also air fry the cannolis if you prefer. Just use gluten-free canola oil spray on the air fryer basket set at 400 degrees fahrenheit and add the cannoli shells. Let them fry for about 6 minutes, then continue with the recipe as normal.