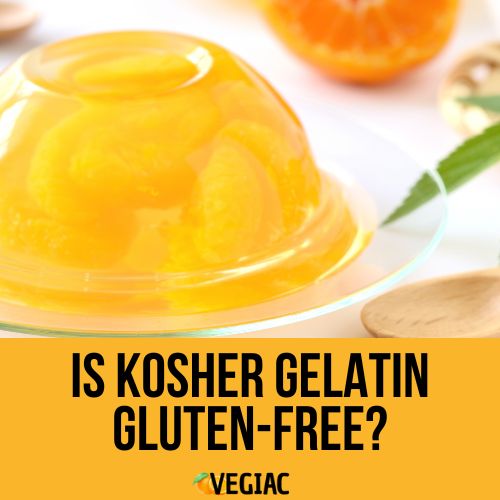 Gelatin is prevalent in today’s food items. You can find it as a thickening agent or binder candies, cheese, processed meat, and even some beverages. If you have a gluten sensitivity, you might wonder if kosher gelatin is gluten-free.

Gelatin is gluten-free because it’s primarily an animal product. It comes from fish, cattle, and pigs’ connective tissues, bones, and skins. Treatments extract and break down collagen protein extracted from the sources, which is then dried into gelatin powder.

Now that we know kosher gelatin is gluten-free, let’s learn more about its uses. We’ll also look into gelatin alternatives.

Because gluten comes primarily from wheat, barley, and rye, kosher gelatin does not contain any gluten. That means if you like jellied desserts or some forms of processed meat, you won’t trigger your gluten sensitivities.

Even makeup products and gel capsules contain gelatin, which is good news for Celiac sufferers. Imagine if taking supplements or freshening up for the day causes problems with your gluten intolerance.

If you have a sweet tooth and like to eat dessert puddings, fruit jellies, ice cream, and yogurt, then you can rest easy knowing that their gelatin is gluten-free. Of course, never assume the other ingredients aren’t gluten sources, so always check the ingredients list.

Where Does Gelatin Come From?

Gelatin comes from animals’ connective tissue, bones, and skins, usually cattle, pigs, and fish. In America, the most common source of gelatin is pig skin. Meat processors typically remove the fat and hair off the skin before freezing and sending them to a processing plant.

That means if you have gluten sensitivity or intolerance, consuming or coming into contact with gelatin will give you no problems at all. Extracting and breaking down collagen protein does not involve wheat, barley, or rye products.

And those boxed jelly desserts such as Jell-o? Even those are gluten-free, according to their ingredients. However, if you have a severe case of Celiac disease, Kraft cannot guarantee that its ingredients aren’t cross-contaminated from the suppliers.

Are There Alternatives to Kosher Gelatin?

If you’d rather play it safe instead of gambling with items that aren’t certified gluten-free, then you have quite a few alternatives. These options are also perfect for vegans, as these aren’t from animals, unlike gelatin.

This popular alternative comes from seaweed, making it perfect for vegetarians and vegans. It gels quicker than gelatin and has a slightly different nutritional value. The most notable difference is its lack of protein; it’s not an animal product.

Agar Agar also requires a different handling method than gelatin. Unlike gelatin which thickens as soon as it dilutes in warm water, you must boil agar and water together. However, it sets faster than gelatin without the need for refrigeration.

If you like your jams and jellies, you’ve already encountered pectin. Derived from the cell walls of plants (mainly citrus fruits), pectin is a gelling agent commonly found in jams, jellies, dessert fillings, and yogurts, just to name a few.

When it’s not being used as a thickening agent, pectin is typically used as a fiber supplement. It also sees medical use as a specialty medical adhesive for wounds.

The main reason you see pectin used with sweets and desserts is because of how it sets. You must boil pectin with sugar and acid before forming a gel. From there, you can use it as an additive for your desserts or baked goods.

Carrageenan is another seaweed-derived thickening agent, this time from a red seaweed called Irish Moss. You’ll typically find this in dairy products and deli meats.

However, carrageenan’s use has been controversial since the 60s. Some studies suggest that this thickening agent causes inflammation and bloating, but there isn’t enough decisive evidence to support this claim entirely.

Nevertheless, the FDA still sees carrageenan as safe for consumption, despite the purported effects. However, the National Organic Standards Board opted to remove this thickener from their list, making products with this ingredient ineligible for the “USDA Organic” label.

Home kitchen uses of carrageenan typically involve vegan dairy products, such as vegan cheese. Like agar, carrageenan must be boiled with water to work. But once it touches water, it gels very quickly.

Is There Any Kosher Gelatin With Gluten?

In theory, there shouldn’t be any kosher gelatin with gluten. It’s not made from any grain products, so gelatin in its base form is gluten-free.

However, flavored gelatin might contain ingredients derived from glutenous sources. For example, some dessert mixes include dextrose as a sweetener. The problem is dextrose can be made with either wheat or corn.

If you want to avoid hidden gluten sources, make sure you examine the ingredients list closely.

Gelatin is a helpful binder and thickener for all sorts of food. Whether making desserts or adding them to food, you can be assured that gelatin is gluten-free. But if you want to play it safe, substitutes such as agar and pectin should be at the top of your list.